Recently I’ve been working on an article about children’s institutions in Victoria in the early 1950s. This work saw me actually get up from my desk and leave the office to do some research – at Public Record Office Victoria, the State Library of Victoria , the University of Melbourne Archives and at the National Library of Australia in Canberra. These days, there is so much digitised historical material to access via desk-based research that a historian can get lazy …

Trove has transformed the way we research Australian history, but I’m glad that it didn’t exist when I did my history degree. Otherwise, I would never have known the satisfaction of finding an article in a nineteenth century local newspaper after hours of work in some library basement. (Although I don’t miss the seasickness that often came from too much time poring over the microfilm reader.)

My research for this article was made so much easier by being able to hop onto Trove and search the digitised copies of The Argus and the Truth on Trove. I also made good use of The Age on the Google News Archive, even though this resource is much less user-friendly. Sitting here at the desk, I was able to read copies of annual reports of the Child Welfare Department and the Mental Hygiene Authority from the 1950s, via the Victorian Parliamentary Papers Database. 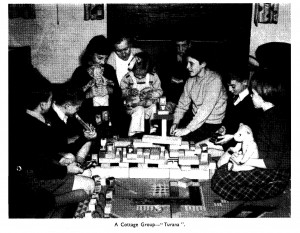 From the report of the
Child Welfare Department, Victoria, 1956, p.9.

From the mid 1950s, the Child Welfare annual reports featured photographs of buildings and sometimes of children and staff (unfortunately the web versions aren’t great quality, and of course, the photographs are very obviously posed – like this one from Turana on p.9 of the Report for 1956).

But it’s good to be reminded sometimes that not everything is on the web, not yet anyway. In the Newspapers room at the State Library of Victoria, there are subject indexes to the Sun (January 1929 to November 1970) and the Herald (January 1926 to Noember 1970). These handwritten index cards were most likely created by employees at the Herald and Weekly Times and somehow found their way to SLV. These newspapers often published articles about children’s homes in Victoria, and the children who lived in them. Over the years, I have used these index cards to make lists of articles that I want to chase up and possibly make copies of.

In March this year, I travelled to Canberra for an event at the National Archives of Australia, and managed to squeeze in a couple of hours looking at 1950s newspapers in the National Library of Australia. I was pleasantly surprised at the technological developments that have occurred since I last went near a microfilm reader (although I still felt a bit woozy). In the short time available, I chased up a series of articles published in the Herald in late 1952. From 25 October 1952, the Herald featured daily articles by Laurence Turner, under the heading ‘Victoria’s Unwanted Children’.

There were 8 of these articles in total, and they generated more discussion in the newspapers, with letters from readers, editorials and commentary from the Victorian government, care providers and various experts. This series was published in the months leading up to the election that saw the Cain Labor government come to power in December 1952.

Today, of about 3100 children committed to the care of the State of Victoria, about 1100 are with foster-parents or relatives.

Seventeen hundred others – delinquents, subnormals, drifters, and other products of broken or unlucky homes – live in institutions. Three hundred live out at places where they work.

What is the State doing for them? How are they being treated? What does the future hold for them?

In search of the answers, a Herald staff reporter inquired into the operations of the Children’s Welfare Department, visited many institutions, and talked with scores of people trying to do their best with the young flotsam and jetsam of the community. This is the first of his series of factual reports. 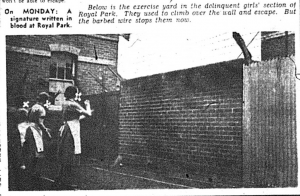 The exercise yard in the delinquent girls’
section of Royal Park
(The Herald, 25 October 1952, p.13)

In ‘Victoria’s Unwanted Children’, Turner argued that Victoria was ‘shirking its responsibility’ to its vulnerable children, ‘farming out’ its State wards to institutions run by charitable and religious organisations. At that time, the only institution run by the Victorian government was the Royal Park Depot. The photos illustrating these articles provide rare glimpses of Victoria’s institutions and their residents.

The photos are all marred by the newspaper’s clumsy attempt to presumably protect their privacy, by placing crude crosses over their faces.

The obscured faces of these children and young people in these Herald photos unwittingly reinforce the point that has been made by so many people who went through the child welfare system, that life in a children’s Home robbed you of your identity. 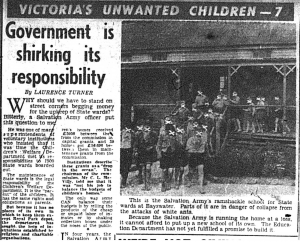 I still have a long list of articles to chase up, from publications that aren’t part of Trove’s digitised newspapers. (For example, The Sun also ran a series about how Victoria was ‘Cheating Children’ in September 1953.) Another motivation for me to get away from the desk …