‘It smacks of slavery …’

In May 1952, the Perth Sunday Times newspaper carried a series of articles about the fate of a young man who lived at Sister Kate’s Home, in Queens Park. A controversy had arisen about the Home’s policy that its residents be sent to work in the country when they turned 17, when one young man said that he would rather stay in the city.

‘There is no reason for the boy to be sent to the country if he doesn’t want to go. It smacks of slavery’, exclaimed Mr J. Lynn, the Gosnells Heath Inspector in the paper on 18 May 1952. Local residents from the Maddington district (the site of Kenwick Farm – a Home for senior boys from Sister Kate’s) also expressed their wish for the young man to stay, banding together to arrange housing for him in the area and a job in a Perth factory.

But Sister Kate principal Miss Lefroy defended the policy of sending young men to the country, declaring that:

All young men should go on the land for a period. That has always been the policy of myself and Sister Kate. We owe so much to the men on the land.

In the country, Miss Lefroy said, ‘there are not so many temptations and it is a better atmosphere in which to build character’.

As for the young man at the centre of this debate, he said:

My whole family (5 of us) have been brought up at the home and I feel grateful to Miss Lefroy. Guess what she says must go.

But I’d be happier at Maddington with a job in the district or in the town. I don’t want to go away – I play football out there and know everyone in the district. 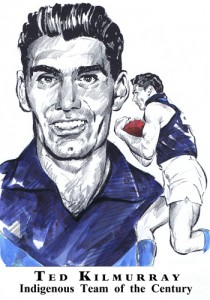 Square’s prowess on the oval was perhaps a significant factor in the high amount of public interest in his fate. The Sunday Times invited its readers to write and give their opinion about what should happen to the young man. The next week, the paper reported that, after having received a ‘flood of letters’, the correspondence was ‘overwhelmingly in favour of Kilmurray not being sent to the country’. The paper published extracts from the letters:

I have a chap turned out from a home onto a farm … he has a wonderful brain had he been given a chance … today he is a labourer … let ‘Square’ remain where he is.

Over a period of years I have taken an interest in the children of Sister Kate’s Home and I heartily endorse their policy of sending youths to country employment.

Kilmurray is almost old enough to hold a rifle to defend his country … why can’t he please himself where he works?

Miss Lefroy, together with the Superintendent, HJ Minors, were invited by the Sunday Times to examine the letters received. The following Sunday, on 1 June 1952, the paper reported that Sister Kate’s had relaxed their policy in this case, influenced by the public opinion in the letters sent to the paper. The paper reported that Square Kilmurray had already commenced work as an apprentice in a city boot factory, and was living in a private home at Maddington: ‘He will play football there’, the paper said.