The importance of photos

Photographs play an important role in everyone’s life – they connect us to our past, they remind us of people, places, feelings, and stories. They can help us to know who we are. For people who grew up in children’s institutions, photographs are especially important – sadly, this is because for so many people, the photographs most of us take for granted, don’t exist. The Senate’s ‘Forgotten Australians’ report (2004) asserted that ‘The lack of photographs and mementos is felt keenly by care leavers … Photographs are a tangible link to the past, to their lost childhood’ (p.255).

One woman’s submission to the Senate inquiry reflected on how photographs helped her to connect to her identity and her past:

Years later I visited every home where I lived and took photos so that I could validate to myself that ‘yes, this place really does exist’ and I remembered what my life was like when I lived there (Submission no.470).

Photographs, even of buildings, can be vital memory cues for Forgotten Australians and Former Child Migrants. For some people, images of Homes are as important and as treasured as some people’s family albums. On the Find & Connect website, our state-based historians sourced as many photographs of children’s institutions as possible – the aim was to have at least one photograph for each entry about a Home.

But despite the team’s best efforts, it hasn’t always been possible to find an image for every Home. But this doesn’t necessarily mean that there are no photos ‘out there’.  From time to time, people contact us to let us know about the existence of photos, so these images can be made available to the wider public.

This is the message users see when we have no photos of a Home on Find & Connect.

Last year, a woman in Queensland got in touch with us at Find & Connect when she noticed that we had no image for Cooinoo Home for Destitute Children – she and her sister had been there as children. She very kindly sent us a copy of a flyer produced to raise funds for Cooinoo, so that we could add it to Find & Connect. 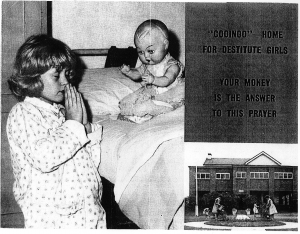 When she sent us the copies, she wrote about the pictures:

I have to say all these pictures were “staged” – the doll had to be brought up from a garage that was full of donated toys. We were not allowed access to any toys, even the dining room was altered to “suit” the pictures. We sat at a long table for meals and were not allowed to talk. 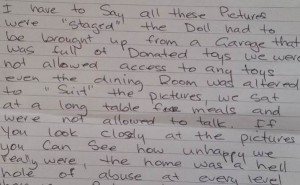 The majority of photographs on Find & Connect that feature children and young people are quite obviously staged – it was common for institutions to use photos of ‘orphans’ in their publicity or fundraising materials, like this picture from St Gabriel’s Babies’ Home in Balwyn, VIC. 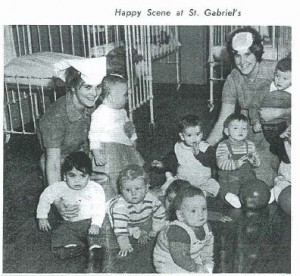 ‘Happy scene at St Gabriel’s’, a copy of a
photograph in the Mission of St James
and St John’s annual report for 1963.

It is important to know the context behind these photos – it tells us that what we see in these images is not likely to be a candid snapshot, giving an accurate representation of daily life in a children’s Home. Rather, these images show us how the institution wanted itself to be seen by people on the outside.

In 2015, it’s rare for a photograph to be taken of a child (let alone published) without a parent or guardian signing a permission form, giving consent. Did the children in publicity shots from the 1950s consent to be photographed? And was it ‘informed consent’?

At a workshop in 2010 organised by the Who Am I project, there was spirited discussion about this notion of consent in historic photographs from children’s Homes. Care Leavers who attended the workshop were adamant that children in these types of photos could not be said to have consented:

They’re children, they’re not in a position of power …

In those regimes, homes and orphanages in the 40s and 50s, you’d be in trouble if you didn’t look at the camera!

It’s true! We were told to smile!

Over time, it became less common for care providers and institutions to feature the faces of children and young people in the photographs they used in their annual reports or other publicity material. From the 1950s onwards, annual reports produced by government departments tended only to show children from behind, or from such a distance as they were difficult to identify. 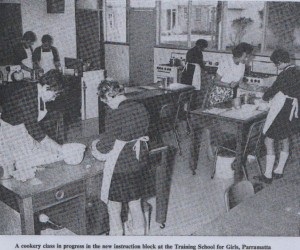 If the photographs are of residents of juvenile justice institutions, like Parramatta Girls’ Training School in NSW, or Winlaton in Victoria, issues of consent, and of making images of the residents available in the public domain, are even more problematic.

On the Find & Connect website, we do include photos that feature children and young people, and some of them would be identifiable. We only publish photos that are already in the public domain (for example, they are already online through state libraries or museums, or they were published in newspapers). When we feature these types of photos, we do not publish the names of the children without prior approval of the persons named.

We publish some images that contain children on Find & Connect because our aim is to improve access to historical material and to raise awareness about the history of children’s institutions in Australia. This history isn’t just about buildings, and the organisations that ran them – the children and young people who lived in these places need to be written back into history. But the public good of improving access to photographs has to be balanced against the importance of personal privacy. On our About page, we urge people to get in touch with us if they have any concerns about a photo on Find & Connect.