Reflecting on the past through memorials

A memorial dedicated to children who were in institutional ‘care’ has recently been installed on the Geelong foreshore in Victoria. The hand-carved limestone couch (by local artist Jacinta Leitch) was officially launched in July 2015. 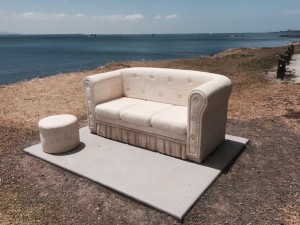 Councillor Tony Ansett, who was instrumental in this memorial coming to fruition said: ‘Our aim was to create a place for people to spend a few quiet moments to think about the past … The seat may become an unofficial meeting place, a place of reflection and connection for people who were placed in care in Geelong orphanages’.

The Browse by Location lists on the Find & Connect web resource indicate just how many institutions have existed in Geelong, dating back to the Geelong Orphan Asylum, established in 1854.

The Senate report of the Inquiry into Children in Institutional Care (the ‘Forgotten Australians’ report, 2004) included a recommendation that governments, churches and agencies fund the erection of ‘suitable memorials commemorating care leavers’. State governments have since unveiled memorials to those who spent their childhoods in institutions – this page on the Alliance for Forgotten Australians website has details about the monuments in Brisbane, Sydney, Adelaide, Melbourne and Perth. In Hobart, there is a Rose Walk in the Royal Tasmanian Botanical Gardens recognising those who were in institutions as children. 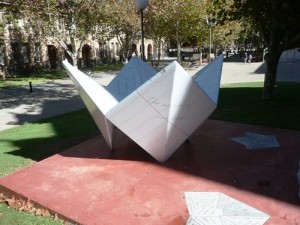 The ‘Unfolding Lives’ sculpture in Perth, dedicated in December 2010, has the following inscription:

‘This memorial brings the “Forgotten Australians” out of the shadows and into the light. Their most enduring legacy will be that the people now and in the future will know their stories and build upon them a platform for better care.

There is a strong thread that links the way a child is raised with the person they become in adulthood. This memorial stands as a reminder of that thread to all who create policies that affect children.’

These memorials are about commemorating and rethinking the past, as well as inviting reflection so that the future may be transformed.

Recent hearings of the Royal Commission into Institutional Responses to Child Sexual Abuse have given rise to a different types of memorial – the ‘loud fences’ seen in Ballarat and the purple ribbons tied to the gates of Knox Grammar in New South Wales. These spontaneous memorials provide a way for members of the community to show their support for those who have suffered abuse and to confront the silence of the past. 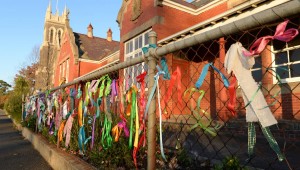 Responding to the film ‘Once my mother’