Norfolk Island was a penal settlement and had a large convict population, along with a high turnover of military personnel and sailors. In 1796, it was reported that, of 163 children living on Norfolk Island, 99 were not provided for by their parents and were instead being fed from government stores. There were high rates of illegitimacy on Norfolk Island, and there was no legal requirement for a parent to support a child. The residential institution established on Norfolk Island was only for abandoned and neglected girls, as Lieutenant-Governor King believed girls were more vulnerable and needed ‘a strict hand or eye over them’ [1]. King provided that girls at the Norfolk Island Orphan School be taught handcraft professions and trained in domestic service. This model of care would continue to be provided to girls over the next century in all the colonies.

When King left Norfolk Island in 1796 and returned to England, he continued to keep an interest in the orphan school he had established. He provided instructions on using government fines and rents for the maintenance and continued operation of the institution, therefore making it the first government-run Home in Australia. The treatment of girls at the Norfolk Island Orphan School shows the very beginnings of the concept of ‘moral danger’. The belief at the time was that to protect homeless girls they needed to be removed to a ‘safe’ location, away from any corrupting influences. In such an establishment they could be watched over and taught the life of a domestic servant so that they would play a role in society rather than become involved in crime, ruin or prostitution.

Norfolk Island’s orphan school model was replicated on the mainland when King returned to the Colony of New South Wales as Governor in 1801. King was appalled by the number of homeless children in Sydney and again deemed the girls to be particularly vulnerable in the male-dominated colony. 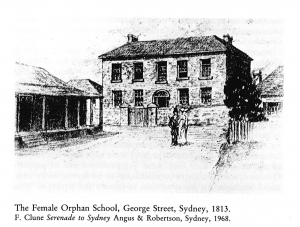 In John Ramsland’s book ‘Children of
the back lanes’, 1986

Shortly after his return to Sydney, Governor King opened the Female Orphan School on George Street. King blamed the high levels of child destitution within the colony on convict parents. He argued that convicts provided a poor example for their children to follow, often had illegitimate children, and had led lives full of ‘vice’ [2]. King again instructed that ‘children are [to be] taught needlework, reading, spinning and some few writing’ [3] to provide them with a skill set. These ideas – protecting girls, and later boys, by removing them from environments the authorities perceived to be detrimental, and teaching them ‘useful’ skills – continued to be a feature of the children’s institutions that were established over the next century.

As well as being the first established, Norfolk Island Orphan School was the first Home to close in Australia. In 1814 Norfolk Island was abandoned and though another penal settlement was established there 10 years later the children’s Home was not reopened.

This story about the very beginnings of children’s institutions in Australia was actually missing from the Find & Connect web resource until recently. This omission was pointed out to the website team in feedback we received earlier in the year from Bonney Djuric. Thank you, Bonney, for getting in touch and for this very helpful feedback.

We appreciate any feedback that is sent to us at the web resource. We are continually updating the content we provide on the site so if you have information that we currently don’t include on Find & Connect then please contact us via the feedback form.

Responding to the film ‘Once my mother’

Have you seen us out and about?