Victorian Redress Scheme – Have Your Say

The Victorian Government has released a public consultation paper on the subject of redress for victims of institutional child abuse that occurred in government and non-government organisations within Victoria. This consultation paper is provided in short and full-length versions. Both versions of the paper, as well as the addresses for sending a submission by post or email, are publicly available on the Victorian Department of Justice and Regulation website.

Submissions are open until Monday 5 October 2015. Responses are encouraged from survivors of institutional child abuse, organisations that may participate in a redress scheme, members of the public and support and advocacy groups. Anyone can make a submission and your submission will remain private if you request it to be so.

The consultation paper represents a step in the Victorian Government’s commitment to implement all outstanding recommendations from the 2013 Betrayal of Trust report. Betrayal of Trust was tabled in the Victorian Parliament on 13 November 2013 as the final report of the Parliamentary Inquiry into the Handling of Child Abuse by Religious and Other Non-Government Organisations. 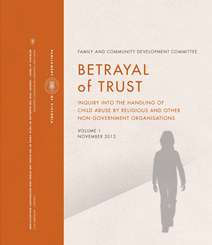 Cover of the Betrayal of Trust report

Among its findings, Betrayal of Trust suggested that the Victorian Government should consider creating an alternative way for survivors of institutional child abuse to raise claims against institutions, instead of requiring people to go to court. Recommendation 28.1 proposed what is commonly known as a ‘redress scheme’, normally established to deliver financial payments and other forms of redress as an alternative to more adversarial forms of seeking compensation, such as litigation. This recommendation is the main focus of the current consultation.

Although Betrayal of Trust was limited to abuse that took place in non-government organisations, the scope of the Victorian Government’s public consultation paper has been widened to include abuse that occurred in government-run institutions, as well as non-government institutions, in Victoria. The release of this consultation paper does not exclude Victoria’s participation in any national redress scheme that might arise in the future as a result of the current Royal Commission into Institutional Responses to Child Sexual Abuse.

Filling in the blanks…