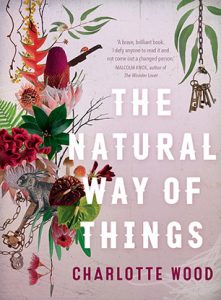 Last week, Charlotte Wood won the Stella Prize for her novel The Natural Way of Things. The Stella Prize celebrates Australian women’s writing and this book explores contemporary misogyny in Australia . In Charlotte’s Stella Interview she spoke about some of the inspirations behind the book:

I heard a radio documentary about the Hay Institution for Girls, a brutal prison in rural NSW, where ten teenage girls were drugged and taken from the Parramatta Girls’ Home in the 1960s. One of the reasons many of the girls were in the Parramatta and Hay homes was that they had been sexually assaulted – at home, or wherever, and had told someone about it. It was this – speaking about what had happened to them – that got many of them sent there. They were deemed to be promiscuous and ‘in moral danger’. This seemed to me to be the worst thing: that their ‘crime’ was that they had spoken up about being abused.

The documentary that Charlotte refers to is an episode of the ABC Radio National’s social history programme, Hindsight, titled ‘Exposed to Moral Danger’.  The episode first aired in 2007 and is regularly replayed. It tells the story of the Institution for Girls, Hay: the girls who were sent there; the female officers who worked there; the people of Hay who remember it; and the State Government representatives of the time. 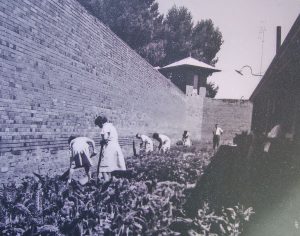 Girls working in the garden, watched over by officers, Hay Institution for Girls, 1965, National Museum of Australia

The Hay Institution for Girls opened in 1961, on the premises of the former old Hay Goal. It was an annexe of the Parramatta Girls Training School, designed to hold up to 12 girls aged 13 to 18, who had committed offences while in the Parramatta Institution. Girls were taken during the night from Parramatta to Hay and were often sedated on the journey. They had their hair cropped upon arrival, were issued with institutional clothing and were expected to do hard labour. Discipline at Hay was brutal. The girls were allowed no privacy, mail, visitors, or schooling and all communication with the girls occurred through a reporting procedure during which they had to remain silent.

In 1974 the institution closed after widespread community condemnation. Despite (or because of) its recent traumatic history, Hay became a place that was not spoken about for decades. In 2004 a former inmate of Hay returned to the site with an ABC journalist, and the first reunion of the Hay Girls Institution took place on the 3- 4 March 2007. A memorial plaque with the words ‘Let no child walk this path again’ was placed in the grounds.

Charlotte Wood decided not to write a literal story about the Hay Institution for Girls but instead creates a fictional work that explores the social and emotional consequences of abuse, punishment, blame, being silenced and speaking out. The Natural Way of Things is set in the near future, where women who have been abused, are drugged and taken to a secure isolated property, their heads are shaved upon arrival, and they are issued with uniforms, before being put to hard labour under the Australian sun…

We’ve made some changes…