Nearly two years ago, toward the end of Blogjune 2014, I wrote a post about a visit to the Royal BC Museum in Victoria, Canada, and the overwhelming feeling that stories about the residential school system were eerily similar to those I knew from working on the Find & Connect web resource.

Most of my time since then has been spent working on other projects, including a full-time PhD. But there are constant reminders.

In a recent conversation with a museum curator they mentioned Goulburn Island Mission, which I later looked up on the web resource. Last week, walking along the northern end of Melbourne’s Sydney Road, a sign for Kildonan UnitingCare reminded me of the Kildonan homes in North Melbourne and Burwood. When in Sydney last year for the Digital Humanities conference at the University of Western Sydney we discovered the venue was only a few hundred metres away from the Female Orphan School. Though some is being lost, and more is at risk, the history of institutional ‘care’ and the organisations involved remain visible in many cities and towns across the country. 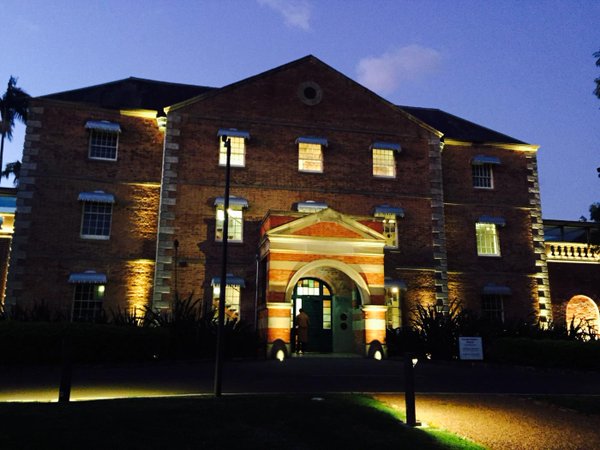 The Female Orphan School taken at night during the Digital Humanities Conference, 2015

People also have stories to tell. Nearly every time I mention the project I discover someone has a personal connection. A parent or grandparent. An uncle. A close friend. With 500,000 children in the system between the 1920s and the late 1980s, it is perhaps unsurprising that many people are only one or two degrees of separation away from someone with a story to tell.

And yet, despite the apologies and enquiries, the projects, the histories, and the commissions, many people remain unaware of just how pervasive the history of institutionalisation is in Australia; how visible it is in our urban landscapes (if you know what to look for) and how it affects the people around us.

Among its many uses we hope this is one more positive aspect to the Find & Connect web resource: helping to make, and keep, this history visible.

Author: Mike Jones
Mike Jones is a Consultant Research Archivist at the University of Melbourne’s eScholarship Research Centre, a PhD Candidate with the University’s School of Historical and Philosophical Studies, and a Research Associate at Museum Victoria. Mike was the former Acting National Program Manager (April 2012-April 2013) and Lead Archivist (2013 to 2014) on the Find & Connect web resource project.