The next Find & Connect?

The past few years have seen massive public attention relating to children in immigration detention whether on the Australian mainland or offshore in places like Nauru. While it would be folly to argue the plight of Forgotten Australians, ‘Care’ Leavers and Former Child Migrants is identical to that of children who are in or have experienced immigration detention there are some disturbing similarities. Children have been placed in institutional settings where systematic abuse has been occurring and where we know significant harm is being done. 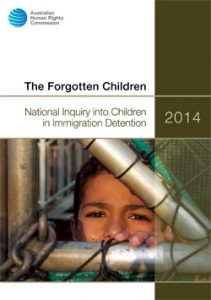 [There are] Universal concerns about safety even within the compound. Most reported they would not leave the compound even though it is now open access. As above most women/children would not go to toilet/shower block alone. One man said that since the policy change to allow free access his friends in Nauru report “No one is going outside because it is not safe. Dangerous after 6pm. Poor control by police –assault, theft, alcohol, rape.” 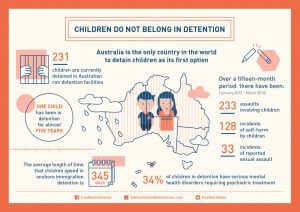 Children Do Not Belong In Detention Infographic

Advocacy group End Immigration Detention of Children claim in the 15 month period, January 2013 – March 2014, there were 233 assaults involving children, 33 reported incidents of sexual assault involving children and 128 incidents of children self-harming. In terms of the health impacts of immigration detention on children many doctors and other health care professionals have risked imprisonment and spoken out about the conditions children face. Legally they are being silenced by legislation, such as the Australian Border Act which bars health professionals from speaking out about the welfare of children.

Media access is also essentially if not technically barred. Visiting offshore detention centres has proved so difficult even United Nations Representatives have been turned away, although the Government denies it was involved in this decision (Cox and Whyte, 2014) and the Guardian Australia has reported a prohibitive $8000 application fee for foreign journalists to enter Nauru.

There is a lack of public information and it seems a lack of information for people inside the system. How will these children make sense of what has happened to them? What records and documents will survive of their experiences? Will there need to be a Find & Connect for these children? The Government is proclaiming the number of children in detention is falling but the children who have passed through the system, at least 167 of whom were born in detention, have already experienced the trauma.

These factors lead me to question whether we will be facing another Royal Commission and apology in the years to come. Where we acknowledge again the abuse of some of the most vulnerable individuals in the world at the hands of successive Australian governments. In ending I include a quote from a former senior charity worker that has stayed with me since I began exploring this area:

I wake up in the middle of the night in a cold sweat, worried that one day we may have to face a royal commission and have to answer for the conditions under which these people were treated and which we didn’t have the guts to challenge the government on.”

Select Committee on the Recent allegations relating to conditions and circumstances at the Regional Processing Centre in Nauru, 31 August 2015, ‘Taking Responsibility: Conditions and Circumstances at Australia’s Regional Processing Centre in Nauru’ Parliament of Australia  http://www.aph.gov.au/Parliamentary_Business/Committees/Senate/Regional_processing_Nauru/Regional_processing_Nauru/Final_Report

Emotional labour in the archives