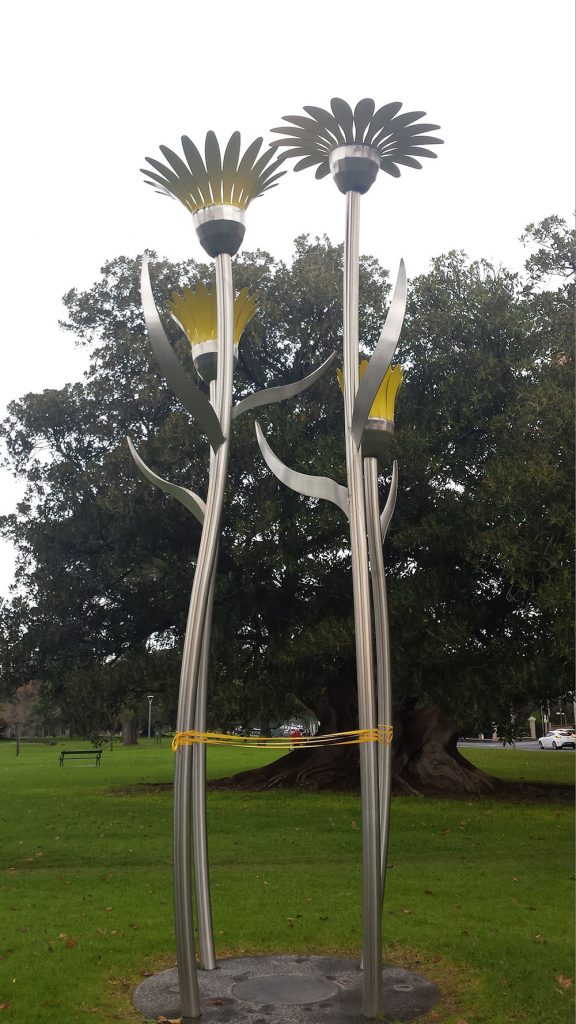 Memorial in Peace Park, Adelaide honouring the children who suffered abuse in institutional and out of home care.

Eight years ago last Friday, on 17 June 2008 the then Premier of South Australia the Hon M.D. Rann moved a motion in Parliament for an apology to the South Australian child victims of abuse while in State Care. Two years later four giant steel daisies bloomed in Peace Park, Adelaide with the unveiling of a Memorial honouring these children. The dedication on the memorial speaks to past, present and future:

In honour of children who suffered abuse in institutional and out of home care. We have grown though awareness and unity. We celebrate our courage, strength and resilience. We are no longer forgotten. Dedicated to the future protection and nurturing of all children. 17 June 2010

Last year on the 7th anniversary of the State Apology a memorial to children who died while in State Care was opened at West Terrace cemetery, Adelaide, one of the largest and oldest cemeteries in South Australia. At that ceremony the names of 50 children who are buried in unmarked graves were remembered as an acknowledgement to hundreds more who share the same resting place. A Kaurna Aboriginal Elder performed a smoking ceremony of healing. This ceremony also represented a unity between members of the Stolen Generations, Forgotten Australians, Former Child Migrants and others who experienced out-of-home care as children.

On Friday both the traditional custodians of the land, the Kaurna people and those for whom the ceremony has the most meaning, Forgotten Australians, were acknowledged at the 8th anniversary gathering. As an historian and researcher working with Find & Connect and Link-Up SA, I was asked to deliver these acknowledgements. The following words were spoken at 11 am in the shadow of the daisies:

I would like to acknowledge that the land that we are meeting on today is the traditional land of the Kaurna people. We recognise their ongoing spiritual connection with the land and pay respect to Elders past and present.

I would also like to acknowledge the most important people here today – Forgotten Australians and Former Child Migrants and others who spent time in Out-of-Home care as children but prefer to refer to themselves in other ways. We are today standing close to what was the Adelaide Children’s Hospital, an institution through which many children who ended up in care passed. So I would also like to acknowledge that as we walk across this land, through city and country, we pass many places and spaces where Forgotten Australians and Former Child migrants spent their childhoods, places where they felt sadness, loss, dislocation and grief and experienced abuse and pain but also found friendship and solace with other children sharing the same experiences. This friendship and sense of community continues on today and is reflected in today’s gathering.

This acknowledgement was followed by speeches by a number of Forgotten Australians, most calling for a redress scheme to be implemented, and representatives from Relationships Australia (SA). Individuals were then presented with certificates of appreciation for their contributions to assisting and advocating on behalf of Forgotten Australians. The ceremony closed with a minute’s silence to remember those no longer with us and then cake and coffee at a local pub.

Inquiries,  Apologies, Recommendations,  Anniversaries, calls for Redress  – this has been a repeating refrain over nearly 20 years, as governments finally come to recognize and acknowledge the impact of many past policies and practices on the most vulnerable people in our society. Survivors come from many backgrounds and walks of life but they share common traits – strength, resilience and hope. As the number of anniversaries clock up, it is time to revisit those pages of recommendations to make certain that the hope these survivors hold for better access to records, improved healing services and for recompense for their suffering, is not in vain.

The Consumer Reference group would like to call for people to participate in their National Day of Action for Forgotten Australians on Sunday 26 June 2016 at 1pm. For more information, please contact the Find & Connect Support Service.

Author: Karen George
Karen George was one of the State-based Historians for the Find & Connect web resource project contributing to the SA and NT sites. She has worked as a consultant researcher at Elm Place and for the Post Adoption Support Service. She currently works as Research Historian at Link-Up SA and as a private consultant on a number of other projects.

Our side of the story