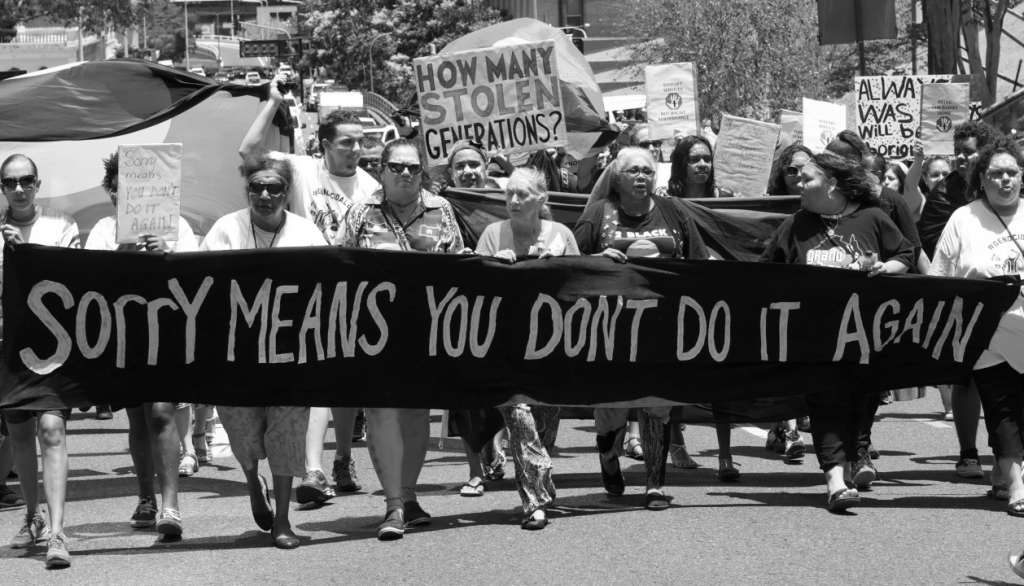 Photo taken of a protest march in 2014. Original image on www.stopstolengenerations.com.au

In 2008, then Australian Prime Minister Kevin Rudd delivered an apology to the Stolen Generations. Many thought that this would be a momentous step toward reconciliation and a fresh start for Aboriginal Australians.

Instead, removal rates of Aboriginal and Torres Strait Islander children have increased by 65 per cent since Kevin Rudd said sorry to the Stolen Generations. This has largely gone unreported by the Australian media.

According to The Productivity Commission’s Report on Government Services there were 14,991 Aboriginal and Torres Strait Islander children in out-of-home care as of 30 June 2014.

That was 35 per cent of all children in care, despite the fact that Aboriginal and Torres Strait Islander children only made up 4.4 percent of the population.

According to New Matilda, Debra Swan worked in NSW Child Protection services for 13 years before she quit in protest after her sister’s grandchildren were removed. Debra said that “The Stolen Generations never stopped. It’s a continuation. They just changed the language of it.”

Various initiatives have attempted to retrospectively address the recordkeeping shortcomings of the Australian Care sector.  Projects such as the Find and Connect web resource have helped members of the Stolen Generations to reconnect with their records and their past.

However the Australian community needs to ensure that the recordkeeping practices and systems within today’s Care sector are improved so that the Indigenous children who are currently in Care will not need to depend on something like the Find and Connect web resource in the future.

Instead, researchers like Dr. Joanne Evans envision a recordkeeping system which places the voice of the child at its centre. Such a system could change the way in which the children are treated, as empowering them to co-create their records would acknowledge their agency and human rights.

Author: Annelie de Villiers
Annelie is a Research Archivist at the eScholarship Research Centre, University of Melbourne. She is currently completing her Masters’ thesis which is titled: ‘Let me tell you: Co-created personal archives for children in out-of-home Care’. This blog post is adapted from a previous post by Annelie on her blog Personal Recordkeeping, Identity and Archives.