This is Part 2 of our blog post by guest author, Helen Morgan, for National Family History Month.

Recently I discovered that my great grandfather Gabriel Morgan (1861-1930) spent time in 1873 as a ‘neglected’ child in the Melbourne Immigrant’s Home, while the City Court tried to locate his family (Encounters with the Immigrants’ Home – part 1).

Further newspaper searching revealed that it wasn’t the first time Gabriel had been brought before the courts as a neglected child. Two and a half years earlier in 1871, aged nine, he had approached a police constable in Bourke Street telling him that his mother had left him in the street and gone away from him. He was taken to the City watchhouse. A younger sister of Gabriel’s was later brought to the watchhouse too. The children’s mother, once located, was charged with neglect. This was my first sighting of my great great grandmother Elizabeth.

It’s confronting, even at this distance, to think a mother somewhere along your family line may have neglected her children. So what was the story? Through different newspaper accounts of the 1871 incident and other records of the family’s interactions with the state around this time I have been able to shed a little light on Elizabeth’s circumstances.

Frankly, I would not have wanted to be female, without male support, poor and responsible for children in late nineteenth-century Melbourne. Even within charitable institutions like the Immigrants’ Home responses were gendered and harsher on women (only women, for example, were threatened with dismissal from the Home if they refused to do their allotted work).

Elizabeth categorically stated to the court over the 1871 incident that she had not abandoned her children, she was trying to find somewhere for them to go. The ‘abandonment’ of her daughter, in fact, was the outrageous act of taking her, afflicted with whooping cough, to the newly established Melbourne Free Hospital for Sick Children, falsely representing that she had been recommended by well-known physician to the destitute Dr Singleton. Given that seven of her ten children had not survived early childhood, including her other daughters, I see Elizabeth’s determination to save her youngest daughter’s life as feisty, laudable and entirely understandable. I imagine that, his mother otherwise engaged wrangling his sister into the hospital, Gabriel probably wandered off, as is a nine year old’s wont – at that time the Hospital for Sick Children was located in Exhibition Street, only a block away from Bourke Street, where Gabriel was found. 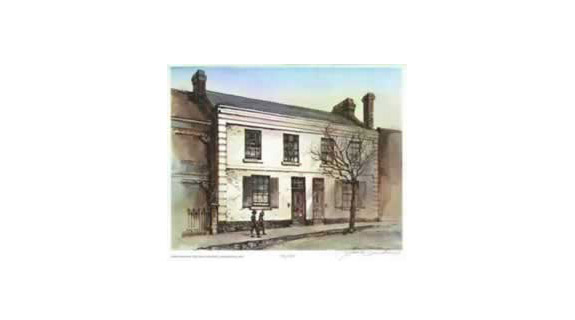 Poor Elizabeth. Less than a year earlier she’d been dealing with the aftermath of her father’s death. I found her signed deposition in the inquest record for her father (Gabriel, after whom my great grandfather was named). He had died in distressing circumstances in May 1870 (the result of a leg amputation). Not long after this, her mother Ruth was reported missing from her home in Richmond (the one presumably to which young Gabriel would return in vain in 1873). She was found a week later, noted in the Police Gazette. I think Ruth was grieving for her husband and family (her adult son, another Gabriel, had passed away little over six months before, the result of a workplace accident, having fallen 20 feet off a scaffold, resulting in a fractured spine which hospitalised him for 17 months). Ruth was reported missing again in mid-1872, this time from a hotel in Fitzroy. Soon found, friends took her to the Yarra Bend Asylum, where she remained until April 1873, released ‘cured’ into the care of her daughter (the ‘neglectful’ mother, Elizabeth). Ruth died of debility and old age a little over a year later in the Immigrants’ Home.

The two documented incidents of ‘neglect’ of her children in May 1871 and October 1873 were bookended by the deaths of both Elizabeth’s parents, with in between times the wanderings of her mother to worry her, probably occurring more often than was reported in the press. It may have been Elizabeth who placed Ruth in the Immigrants’ Home, which by this time was taking in the poor and destitute of Melbourne, not only newly arrived immigrants. Eye witness reports are mixed as to the state of the Home, one report appearing in the paper a week before Ruth’s death stated, ‘The greater portion of the buildings were such as only those in extreme poverty would care to seek a shelter in them’ (The Age, 11 August 1874, p.4). As it had been in 1871, when Elizabeth sought help for her children, surely it was necessity that drove her to this course of action after her mother’s release from Yarra Bend.

It struck me that Ruth was probably in the Immigrants’ Home by October 1873 when her grandson Gabriel was remanded there for seven days. (Allow me this ray of light. No records exist to disprove it.)

In the 1870s the men were housed separately on the west side of St Kilda Road and the women and children were together on the east side. I wonder, did they realise each other was there? Gabriel surely knew his grandmother, the home in Richmond where she’d lived his first port of call on his return from the country. But out of context would he have recognised her, in the last months of her life, with her thinned features and stooping gait, mentally frail and aged? And in that state would she have known him? I can only hope that they did.

The Royal Melbourne Hospital Archives hold records of the Immigrants’ Aid Society (Accession 1346) including admissions (from 1885), roll books (from 1880), an index to inmates (1884-85, 1889), statistical register of inmates (1878-1884) (both outside the time frame of Gabriel’s and Ruth’s time in the Immigrants’ Home), and minutes. Salient information from the minutes of the monthly committee meetings, including names and details of those who died in the Home, was regularly reported in the Melbourne newspapers in the nineteenth century.

Key newspaper articles mentioned in the text include:

Language and the Words We Use