The Independent Inquiry into Child Sexual Abuse (IICSA) published its report on 1st March, 2018 after investigating child migration from Britain. This may well be seen as another memorable milestone on the long road to recognition and justice for UK former child migrants, the majority of whom in the post war period were shipped to Australia. IICSA is concerned with children who were abused in England or Wales and children from either country who were abused abroad.

“Child migration was a deeply flawed government policy that was badly implemented by numerous organisations which sent children as young as five years old abroad.

“Successive British governments failed to ensure there were sufficient measures in place to protect children from all forms of abuse, including sexual abuse. The policy was allowed to continue despite evidence over many years showing that children were suffering.

“We hope that this report offers acknowledgement to those who experienced abuse resulting from the child migration programmes.”

The terms of the Inquiry were extended to include former child migrants. This resulted directly from skilled, sustained advocacy by the combined efforts of the Child Migrants Trust and the International Association of former Child Migrants, who were keen to ensure that the Inquiry might spotlight issues which were still unresolved. In particular, while the UK Government had usefully facilitated and offered help with reunion visits through the Family Restoration Fund, it had not addressed the significant issue of financial compensation. 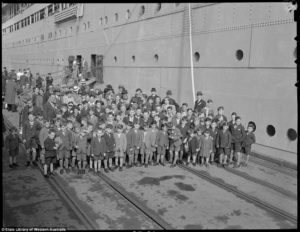 In some respects, IIICSA has a similar role to the Royal Commission on Institutional Responses to Child Sexual Abuse, which has recently reported in Australia.  Several former child migrants from different States in Australia gave evidence in person before the Inquiry in London last year. Many more gave evidence by videolink or by written submissions and the Inquiry also considered evidence from those sent to New Zealand, Canada and the former Rhodesia. Two academics provided the historical and policy context to child migration while the Child Migrants Trust and the International Association gave evidence in person and in writing to the Inquiry.  Sending agencies and Government departments also contributed and were legally represented.

1  That all surviving former child migrants should receive the same redress payment from the UK Government which was ultimately responsible for child migration schemes. The amount of such a payment would be decided by the Government and should begin after 12 months, if this first recommendation is accepted and implemented.

2  That those agencies or charities involved in child migration which have not made an apology to former child migrants should do so now. However, the Inquiry did not regard another government apology as necessary.

3  All agencies which hold records on former child migrants should preserve such records and follow best practice in record keeping.

Former child migrants know only too well that Inquiry reports take time to be considered by Government and that proposals are not always acted upon either fully or quickly. IICSA was sensitive to the need to give former child migrants due priority given their advancing age and advised that their key proposal for a redress scheme should be implemented within a year.

Obviously, it is too soon to tell whether the IICSA report is a real advance for former child migrants because so much still depends on the reaction by the UK Government. The Inquiry was very clear in its conclusion that the government carried a major burden of responsibility for many of the terrible consequences of this deeply flawed policy and had missed warning signs that child migrants were at risk overseas. Many hope that the UK Government will soon give its urgent attention to this report.

The report is available to view on the Inquiry’s website.

Cardinal Pell, the Church or Civil Society: Who’s on Trial?