Care Leavers in the news 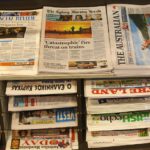 It’s been a busy few weeks in the news for people who spent their childhood in “care”. Today’s post completes the trilogy of media relating to Care Leavers, with Care Leavers in the news. With so much around on redress and the Apology, please share anything that has resonated with you in the comments for everyone to see.

A Senate committee is expected to endorse legislation for the $3.8 billion national redress scheme, despite Labor and others saying some child sexual abuse survivors will be “short-changed”.
https://www.sbs.com.au/news/senate-report-on-abuse-redress-laws-due

Mr Turnbull said 104 of the Royal Commission’s 122 recommendations directed wholly or partly at the Commonwealth, have been accepted. This includes setting up redress scheme.
https://www.news.com.au/national/politics/national-apology-and-redress-scheme-form-part-of-the-federal-governments-response-to-royal-commission-into-institutional-responses-to-child-sexual-abuse/news-story/e2158b4df6432d7672bf0dff6024585d

Child sexual abuse: all states on board for redress after WA resolves doubts

The only remaining state not to sign up to the national redress scheme for child sexual abuse survivors, has resolved its concerns with the federal government, and its attorney general will now put the scheme to cabinet.
https://www.theguardian.com/australia-news/2018/jun/08/child-sexual-abuse-all-states-on-board-for-redress-after-wa-resolves-doubts

A child sex abuse survivor in central Queensland says the national redress scheme is out of touch with the needs of “forgotten Australians” with little or no support services available in many regional and rural areas.
http://www.abc.net.au/news/2018-06-11/abuse-survivor-says-redress-scheme-out-of-touch-in-regions/9853366

Government response to child abuse royal commission is positive, but will need to go beyond an apology

The federal government has announced it will establish a National Office for Child Safety and issue a formal apology as part of its response to the Royal Commission into Institutional Responses to Child Sexual Abuse.
http://theconversation.com/government-response-to-child-abuse-royal-commission-is-positive-but-will-need-to-go-beyond-an-apology-98243

Leading child abuse advocates have responded with anger and dismay after the Catholic Church immediately pushed back against new laws that would force priests to break the seal of confession.
https://thenewdaily.com.au/news/national/2018/06/13/child-abuse-royal-commission-advocate-outrage

“There must be something wrong with the Australian psyche that we don’t value our children.”

Leonie Sheedy from the Care Leavers Australia Network advocates for those who were abused in institutional care and she spoke about this issue that Australia faces. pic.twitter.com/r1XBkOgZzC

Hearing the Past in the Present – online exhibitions, oral histories, radio/podcasts and theatre

Reporting back from the Canada Archivists Conference