Last week, the Children’s History Society held their conference in London, themed “Children on the Move.” Kirsten Wright, Program Manager of the Find & Connect web resource, was there to speak on Dispersed records, displaced children.

This paper considered the different types of movements, changes and dislocations that children experienced while in ‘care’, and the impact on the creation of, and later access to, their records. The changes and transformations those children underwent included: 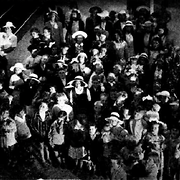 Organisations responsible for the ‘care’ of children were also responsible for creating records about them. The quality, accuracy and type of records varied vastly between organisations. In many cases, there is no single case file summarising the child’s time in ‘care’. Instead, there are many distributed records of all kinds.

The content of these records does not reflect the lived experience of a childhood spent in ‘care’, however that experience is mirrored in the fragmentation and dispersal of  records across organisations, jurisdictions and locations. This dispersal creates another barrier for those trying to find and access their records as a way of piecing together a childhood as dispersed and fragmented as the records still being sought.

Revisiting the Royal Commission into Aboriginal Deaths in Custody