Funded by the Irish Research Council, project team members from the School of English, Drama and Film, and the UCD Insight Centre at University College Dublin, took the contents of the 2009 Report of the Commission to Inquire into Child Abuse (also known as the Ryan Report) to analyse using digital humanities tools. The resulting Industrial Memories site recently went live.

Principal Investigator Associate Professor Emilie Pine spoke in Melbourne last year about the project. She highlighted the need to make the Ryan Report available in different ways: while it was one of the most significant reports to be produced in Ireland, its size and structure made it difficult to engage with, and as a result, was not widely read. The Industrial Memories project aimed to make the report more accessible.

We’ve highlighted some of the key features of the Industrial Memories site, but it is well worth exploring further:

The What We Learned page summarises key findings of the project, and there are striking similarities between the Irish experience and the findings of the Royal Commission here in Australia: abuse of all kinds was rampant; the child welfare system enabled the abuse through secrecy, there was a lack of reporting and unwillingness to listen or take children seriously; it was not a ‘few bad apples’ perpetrating the abuse, but instead, a systemic  culture of abuse existed.

Using network mapping, the project tracked the transfer of staff within the residential child welfare system, showing that abusers were not dismissed from religious orders or removed from having contact with children; instead, they were transferred to other residential or day schools where the abuse continued. The project also created network graphs showing how individuals were linked within the Ryan Report, and another tracking correspondence between individuals and organisations such as the Department of Education. 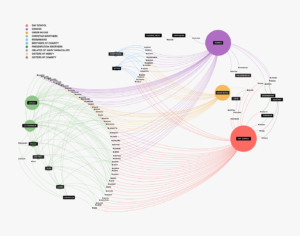 The project also created a mobile app called Echoes from the Past, designed to help us imagine being a child in one of the Industrial Schools. Testimony from the Ryan Report was used to create audio tracks which are triggered to start playing when in specific locations in west Dublin. The tracks are also available to play on the website.

The Ryan Report itself has been divided up and entered into a database. This means that the full text is searchable, creating a different reading experience than going through the entire PDF; and enabling new connections between different sections of the report to be made.

With Australia’s Royal Commission into Institutional Responses to Child Sexual Abuse handing down its Final Report in December 2017, the Industrial Memories project provides some great inspiration for doing innovative digital humanities work with a report of this nature, to help people understand it without having to read through a large, multi-volume PDF. The network mapping and mobile app also show different ways to use and understand reports of this nature.

A week in #BlogJune