Last month, a few members of our team went on a trip to the Public Record Office Victoria’s reading room in North Melbourne to have a look at some newly available records relating to children’s institutions in Victoria.

The records are called ‘Voluntary Children’s Homes Files’ (the PROV reference number is VPRS 18069). The files document interactions between the Victorian state government and various institutions run by charitable or church organisations. Even if Homes weren’t run by the Victorian government, the Department still had oversight of institutions. Many non-government Homes accommodated wards of state, and provided the Department with updates about their placements. The Department also conducted periodic inspections of Homes and reports were placed on the file. Non-government Homes had to apply to the Department to be registered as ‘approved children’s homes’, and the application forms and correspondence often include annual reports, newsletters and press clippings. Charitable and church Homes also received funding from the Victorian government. 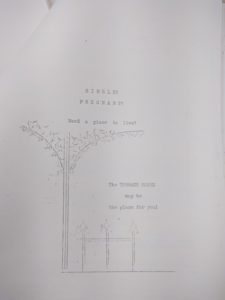 A lot of the records in this series date from the 1970s and 1980s, a period when child and family welfare was undergoing rapid change in Victoria. The Social Welfare Department introduced a program of regionalisation in 1972, transferring programs from the centralised main office to regional centres around Victoria. From 1976, there was a new funding system which saw the Department meet 90% of staff salaries in non-government institutions, and an increase in the ‘per capita’ rate the Department paid to children’s Homes. During this period, the large-scale, congregate care model of children’s institutions was increasingly viewed as an undesirable way to raise children. Organisations were starting to close down or remodel their institutions, in smaller-scale accommodation models. 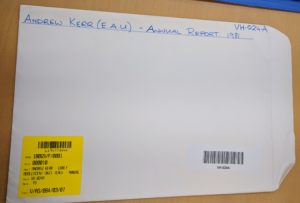 The records at PROV demonstrate how church and charitable organisations tried to keep pace with these changes in child and family welfare. There is a file about the Andrew Kerr Early Adolescent Unit. The Unit’s first annual report from 1981 is on the file, and it explains how it came to be. The Andrew Kerr Memorial Home in Mornington, run by the Mission of St James and St John, had for a number of years been transitioning from congregate care to a cottage model, and preparing to sell off the property. In 1980, the Mission established an early adolescent unit, using the family group home model. 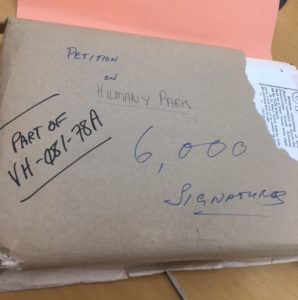 Some of the files demonstrate a resistance to change from church and charitable organisations. There are records of a campaign in Gippsland from 1975, protesting against the government’s intention to close the Kilmany Park Boys’ Home in Sale the next year. Kilmany Park had been run by the Presbyterian Church since 1923. The file contains submissions from the Mayor of Sale, the superintendent of Kilmany Park and others, arguing for the Home to remain open. There are press clippings from regional newspapers. The majority of the file is taken up by a ‘Save Kilmany Park’ petition, with 6,000 signatures. Kilmany Park ended up closing in 1978, replaced by family group homes in Sale and Bairnsdale run by a new Uniting Church organisation, Kilmany Family Care.

The Voluntary Children’s Homes Files are divided into two batches, or ‘consignments’ to use PROV’s jargon. Consignment P0001 contains records which are on open access, and available to any member of the public in PROV’s reading room. There are 13 units (boxes) of records, containing 82 items (files), with a date range from 1937 to 1990. The records on open access are largely administrative records, not relating to individuals. Still, they contain valuable information about children’s Homes, and shed new light on the history of these institutions. 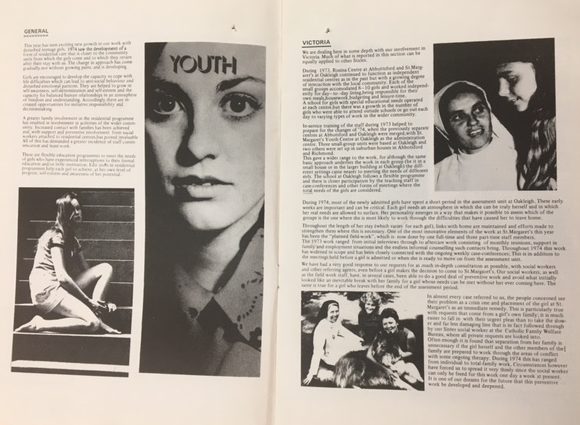 Another consignment (P0002) is closed to the public – there are 30 boxes in this consignment, dating from 1919 to 2001. These records are closed under section 9 of the Public Records Act 1973 to protect the violation of personal privacy. These records contain personal information about individual children in institutions and their families. For example, some of the files contain lists of children’s names who were placed by the Department in a Home or information about holiday placements for state wards. These files also include records relating to allegations of sexual and physical abuse against children in institutions, and the Department’s response to such allegations.

The highly significant personal information in these ‘administrative files’ was highlighted in a report from 2012, following the Victorian Ombudsman’s investigation into the storage and management of ward records by the Department of Human Services. The Ombudsman’s report discussed the records which are now part of VPRS 18069:

This collection of records was originally thought to have only contained administration files relating to former institutions, which whilst of historical value, were not thought to relate to individual wards. The collection had been marked for destruction … My investigators viewed a sample of these records during a site visit to the Bourke Street repository in December 2011. Amongst these records were documents relating to the investigation of sexual assault allegations made against a staff member of a former home. The documents contained details of the allegations, police statements of the wards involved, and the response of the relevant home and authorities. Given the state of the records and the references to numerous individuals, it had taken the archivist nearly four months to scan and catalogue the contents of just six of the 48 boxes in the collection. My investigation was told that 2,744 references to individual wards and seven documents relating to the alleged abuse of wards had been identified in just those six boxes.

Following the Ombudsman’s report, the Department began its Ward Records Plan Project to identify and index thousands of records in its custody relating to wards of the state, dating right back to 1864. As a result, large amounts of ward records are now stored at Public Record Office Victoria, some of them on open access like VPRS 18069. In 2017, the Department published its Finding Records website, which has detailed guides to its collections relating to Victorian institutions. (You can read a blog post about this project here.)

If you’re interested in finding out more about the records in Voluntary Children’s Homes Files (VPRS 18069), you can find out more information about the records at our entry on Find & Connect. You can request records from the open consignment and have a look at them in PROV’s reading room at the Victorian Archives Centre in North Melbourne. To request access to records in the closed consignment, get in touch with the Care Leavers Records Service at the Department of Health and Human Services.