Rescuing the ‘fallen women’ of Tasmania

Some institutions on Find & Connect have complicated histories. There are name changes, ‘official’ and ‘alternative’ names, different addresses, changing functions which can make it tricky to get the data right. I remember Deb Rosser, one of our state-based historians, used to describe the research process as ‘unravelling wet spaghetti’!

One institution with a messy history is Hope Cottage in Tasmania. Established in Launceston in 1887, Hope Cottage had a change in management in 1892, closed in 1896 and was subsequently transferred to Hobart where it continued to operate as ‘Hope Cottage’, but as part of the larger Home of Mercy at Cascades. 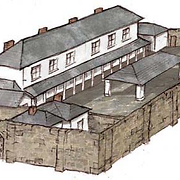 Launceston in the late nineteenth century was apparently plagued by the nuisances of larrikins and depraved girls. The Daily Telegraph painted a vivid picture in an article from 1896, describing the ‘gangs of rough, uncouth boys who nightly perambulate the streets’ and ‘young girls being allowed to wander the streets without control’.

Hope Cottage in Ann Street, Launceston was established by Grace Soltau, a member the Women’s Christian Temperance Union (WCTU). The WCTU had its first meeting in Tasmania in 1885 – its members were advocates of alcohol abstinence and ‘moral purity’ (which, as Caroline Evans points out, really meant no sex without marriage).

Mrs Soltau’s home in Launceston was for young single women pregnant with their first child, the first institution of its kind in Tasmania. In 1890, Soltau distinguished Hope Cottage from institutions for ‘fallen women’, such as the Home of Mercy and the Anchorage, both located in Hobart. Hope Cottage was more for ‘saving the weak from falling and guiding their feeble footsteps into safe and pleasant paths of well doing; than in attempting to rescue those who have fallen absolutely into vicious courses’ (The Colonist, 1890).

In 1892, Grace Soltau handed over the work of Hope Cottage to the Church of England. The new management increased the length of time women stayed at Hope Cottage, from 6 months to 9 months after their babies were born. However, the Church found it difficult to fund Hope Cottage. In 1894, Reverend Kelly reported that Hope Cottage was commencing its fourth year in debt. Kelly was quoted in the Launceston Examiner, about how the need to do female rescue work ‘quietly and unostentatiously’ made it difficult to raise funds.

In August 1896, the Church of England pointed to a new female rescue home in Launceston as being one of the major reasons behind its decision to close Hope Cottage. The Church hinted that this home was less circumspect in its marketing and fundraising than the Anglicans. The Salvation Army Rescue Home had opened in May 1895 in Charles Street, Launceston. (It later moved to larger premises on the Cataract Hill in South Launceston and was known from that time as Rock Lynn House.)

A newspaper article about the closure of Hope Cottage stated: ‘… the chief reason has been the establishment of another rescue home in Launceston, commenced with great energy, but worked on different principles’. It was claimed that some young women were refusing to come in to Hope Cottage when they learned the rules and the requirement to remain for months after the birth, ‘alleging that at other institutions they can leave when they like’. The article referred to Hope Cottage’s belief that rescue work ‘ought to be done in silence and quietness’ and claimed that the home ‘had never attempted sensational methods of appeal’ (Daily Telegraph, 19 August 1896).

The Salvation Army responded in a letter to the paper the following week, declaring that the claims made about its rescue home were ‘most serious misstatements and insinuations that are wholly without foundation or fact’. Gover wrote that the Church of England’s claim that ‘at other institutions women can ‘leave when they like’ was an attempt to ‘blacken the Salvation Army’s work in order to excuse the confessed failure of purely Anglican Church methods’ (Daily Telegraph, 25 August 1896).

In September 1896, the Church of England announced that arrangements had been made to continue the rescue work of Hope Cottage but in a new location. The home was to be relocated to Hobart where the Church already ran the Home of Mercy at Cascades.

The Home of Mercy in Hobart had been established in 1890 by the Church of England. In 1891 it moved to the Female Factory at Cascades. That year, the average age of the women was 17.6 years. The oldest was 22 years old and the youngest, 11. In contrast to Hope Cottage, the Home of Mercy’s purpose was to reform its inmates – an article from 1890 described it as a ‘penitentiary’. The committee of the home of Mercy also ran the Contagious Diseases Hospital, which treated women with sexually transmitted diseases. Some women were discharged from the Hospital to the Home of Mercy.

Hope Cottage in its new location was governed by the same board of management as Home of Mercy, but operated as a separate institution. As it had been in Launceston, Hope Cottage was a rescue home for ‘first cases’ only (single mothers pregnant with their first child).

The Hope Cottage ward eventually amalgamated with the Home of Mercy. There are some records from its time in Hobart within the collection held by Clarendon Children’s Home Inc.