I was in Ireland recently and took the opportunity to visit some sites of former orphanages, Industrial Schools and children’s institutions. I found a range of different monuments and memorials, some physical, some virtual, some lavish, some simple and understated, and some conspicuous by their absence.

The most striking memorial I visited however is not at a former institutional site at all. In fact it is in the middle of Dublin’s biggest tourist district, Temple Bar. “Somebody’s Child” is somewhere between a memorial and a public art piece. It contains the names and birthdates of children who died in Care in Ireland. The names are listed in panel after panel of text. Beneath the text are dozens of empty silver nameplates – the kind that typically appear on coffins – to mark those children whose names are not known.

It is a sort of ‘guerilla’ memorial, placed seemingly spontaneously on a prominent but otherwise empty street corner. It is not expensive, and it looks temporary, as if it will last only as long as the pieces of wood that hold it together. On one side there was a storage pallet leaning against it, seemingly discarded. Another visit later that night however revealed that the pallet had a specific purpose, as an improvised step ladder, helping local rough sleepers to climb over the memorial and get some privacy behind it.

‘Somebody’s Child’ was installed in 2015 by Dublin City Councillor, Mannix Flynn, an independent politician who has built a reputation as a maverick progressive leader. It has come to hold a number of meanings, acting in some ways perhaps as a de facto national monument to all forms of neglect and abuse. In its scaled back and low key format, not dissimilar in this way to the spontaneity of the Loud Fence movement, ‘Somebody’s Child’ has managed to insert discussions about neglect, abuse and Care into the urban landscape of Dublin. 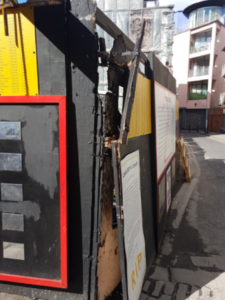 Though it has not been without controversy and opposition, it is a poignant reminder for citizens and visitors alike of the “cruel Catholic state” that had come to characterise Irish institutional life. I was struck, as I’m sure many have been who have read the news from Ireland lately, by the appetite and drive for social reform in Ireland.  This monument serves as a powerful demonstration of a  grassroots will to deliver historical justice to Irish survivors of institutional Care.