This is an excerpt from a longer piece that was featured on the National Museum of Australia’s “Inside Life in children’s homes.” Authored by by Wayne Lewis, the story captures a sense of what Christmas in “care” could be like for some children. You can read the full story here: http://nma.gov.au/blogs/inside/2011/11/16/illegally-adopted.

If you were in “care” as a child and need support at this time of year, you can contact a Find & Connect support service in your state or territory. They are listed here: https://www.findandconnect.gov.au/contact/

“I don’t actually remember being informed that “Ginger” and I had been selected to go out for Xmas holidays with anyone or for that matter anywhere. But on the 12 December 1954, (confirmed date) I was then going ten and a half, I remember Ginger and I being picked up in a utility with a canvas canopy, packed full and going into the city to a hotel where we picked up Dorothy. I remember Walter carrying her into the car, which was filling up more especially with the wheel chair, I recall looking out the window of the hotel room I could only see a red brick wall with pipes running up and down. I think I was expecting a view of interest at that height. We must have left the city fairly late in the afternoon. We really had no idea of where we were actually going but that it was a long trip, turned out to be about six hundred miles. The Ute had had a good canvas canopy and framing over the back of it, so it was all loaded up and we made ourselves comfortable by arranging soft stuff on top and sitting/laying on top of everything.

We could see out the front through the cabins back window and the windscreen or sit and just watch out the back. It got dark not too long after we had left the city, from memory it was a clear night. Remembering we had no idea really what direction we were traveling, and I had only seen the sea twice in my life and had no idea of it’s direction. Up to this stage I had never been out of the city area, I could not even comprehend the vast distance we were traveling. As we travelled on, up and down the hills, the Toowoomba Ranges, I was looking through to the front and remember thinking of just how far can you travel without running into the sea it often looked like we were heading for the sea, yet never reaching it. I was afraid that in the dark we would run into the big sea and all drown. Yet when I looked out the back it looked like we were going away from the sea, it was sometime later that I worked out that the blueness I thought was the sea, was just the horizon like I’d never seen before, vast.

G. and I would have talked some, but I guess sleep must have taken over as I don’t remember any more of the trip itself. The next I remember we had arrived at “Ularunda”, it was still dark, I have no idea of the time, and we pulled up by the cottage, which was separate to the main house but adjoined by a wooden walkway. W. carried D. into the cottage to herbed room at the far end, while we unloaded the vehicle. Walters’ room was just inside the entrance with a large room in between, this is where G. and I slept during some of our stay but then moved up to a room upstairs each in the main building. 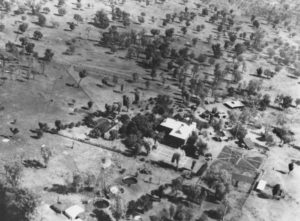 We had a wonderful stay and Xmas that holiday, what with W. and D. reading the “Jungle Book” and other stories to us of a night that would bring tears to our eyes. They both could read so well with so much feeling. There seemed so much for us to see and do, what with watching sheep or cattle being slaughtered for meat for the station by the “Cowboy”, and helping to bring in the milking cows and watching them being milked and helping feed the chooks. What with watching wild horses, cattle and sheep being mustered and or branded. Watching and helping the station cook by scraping out the bowels with a spoon or our fingers.

One afternoon G. and I decided to try to catch a pony with high hopes of having a ride, didn’t think to ask or inform anyone, but with a bridle in hand we set off past the cattle yards about 500 yard from the homestead. We followed the dirt two wheel car track road, just taking our time with not much notice of distance or time. Suddenly there it was, the pony, without experience in cornering a horse we tried different tactics but the pony kept evading us. During the chase at this time generally keeping close to the road, we noticed heavy rain clouds building up and the daylight seemed to suddenly be getting darker, being determined we persisted. We lost sight of the pony, so while following the direction it seem to take and catching our breaths, it then suddenly occurred to us while walking, which way were we traveling, and which way was home? We gathered our whits, decided which direction to try, went the way we thought the road should be, which by this time the sky’s opened up, we found a fence line, followed it, and found a road grid on the “road” we recognised. By this time we were drenched starting to get worried and not sure just how far we had to go to return home. From memory we were fairly quiet trudging along in the downpour and starting to worry if we were going to be home before anyone missed us, as time seemed like hours, or in time for our bath before dinner which was a fairly formal ado, silver ware and all. When suddenly in the distance, we more than happy to see the familiar cattle yards, home at last and still some daylight.

The first thing we did was to have a bath. We loved that big old bath tub, never had one at the “Home” that we knew of, we used to sit and slide along the side to the and down the slope of the end of it. As luck would have it, it was about time for our bath anyway ready for the evening, so bathing and clean cloths were in order. Weren’t game to tell a soul of our nears loss or adventure. After dinner we often played a bit of billiards on the full size table, prior to being read a story before bed.

There was a tennis court actually two with one set close to one side of the building where we used to watch the adults play, usually with visitors from other stations, or have a bash at it ourselves with the visitors kids. The tennis could be watched from the veranda of the second floor over looking the court, it was usually a big ado with all the silver ware being bought out for morning or afternoon tea onto the veranda. G. and I and with visiting kids used to often go for a swim in a water tank that was placed beside the cottage, placed in such a way as to make it easy for Walter to be able to lift Dorothy to and into it. Or go play driving cars in a couple of old wrecks or just use them as a cubbyhouse.

We enjoyed that Xmas holidays, what with visiting the Hs at Durella, the Cs at Aqua, Bs and the Hs families and swimming in dams, watching their musters. If memory serves me right we had Xmas dinner, at Durella where the adults played tennis while we kids swam, ate till we could eat no more, and generally had a Xmas of all our Xmases. It was the first Christmas where I felt I had my own toys to play with and what with the clothes D. and W. had bought us and clothes we were given as presents, we both felt good, and neat.”