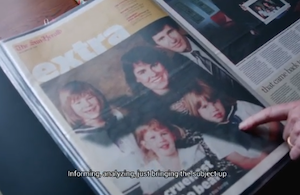 GUEST POST: Katie Wright is an Associate Professor of Sociology at La Trobe University. If you would like more information about the ‘Citizen Activism’ project you can email katie.wright@latrobe.edu.au.

What is the role of activism in creating better societies? How do we recognise and remember social change activists? And how do we keep the work of the Royal Commission into Institutional Responses to Child Sexual Abuse alive? These are some of the questions that sparked a new research project, Citizen Activism: Reclaiming Childhood Rights.

Our research on the Royal Commission demonstrates the vital role played by individuals, advocacy groups, and the media in generating the public interest and political will that was needed to spark this major public inquiry.

Earlier this year, we launched the first outcome of the Citizen Activism project – a web series of documentary short films profiling the work of three trailblazers. The films are presented online for the Democracy Are You In? exhibition at the Museum of Australian Democracy (MoAD).

These films remind us of the importance of people speaking out, taking action, and demanding justice.

Social change happens because people fight for it.

Along with others, care leavers have worked incredibly hard to have their voices heard – before, during and after the Royal Commission.

One of the films in the MoAD exhibition features Leonie Sheedy from Care Leavers Australasia Network (CLAN). Leonie talks about the history of CLAN, the many years of activism and lobbying undertaken by care leavers, and the importance of establishing an Australian Orphanage Museum to preserve objects and ensure the history of care leavers is honoured and not forgotten.

Social media has provided an important platform for advocacy groups and individual activists. But the traditional media was critical because it enabled people’s stories to reach broad audiences. It also allowed journalists to expose institutional practices of cover-up and denial and put pressure on governments.

The Citizen Activism project profiles journalist Joanne McCarthy from the Newcastle Herald. Her story underscores the importance of investigative journalism, the value of amplifying the message, and how journalism itself can be a form of activism.

For decades now, journalists have taken the stories of victims and survivors and their families to the broader public, which has been critical to changing understandings of institutional abuse. This has only been possible because people have been willing to speak out.

The third film in the Citizen Activism exhibition profiles Chrissie Foster from Melbourne. It shows how the experience of her family led to a longstanding fight for justice. She is now focused on the ongoing task of ensuring the recommendations from the Royal Commission are fully implemented.

While the films in the online exhibition feature three individual activists – they speak to broader stories about the power of people from Australian suburbs and regional areas having a public voice.

Our project aims to document the incredible tenacity of so many people in bringing attention to the issue of institutional child abuse, holding organisations accountable, and forcing governments to take action.

In the next phase we plan to build on the Citizen Activism films in the exhibition to develop a more comprehensive account of the social change advocacy that led to the Child Abuse Royal Commission.

Our aim is to ensure that the people who stood up, spoke out and demanded justice for victims and survivors are not forgotten.

In a Care Leaver’s Voice