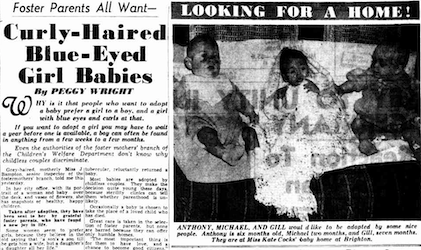 Around 500 000 children grew up in out of home care between 1920 and 1980 in Australia, moving through a system that over time included workhouses, institutions and orphanages to a focus on smaller ‘cottages’, foster care and adoption.

There was little support for families in Australia experiencing poverty, and few options for single parents, particularly women, to continue to care for their children. Children of loving families were placed in orphanages when their families could not afford to care for them, and their parents prevented from contacting them.

Women who became pregnant outside of marriage faced enormous social stigma, and their children were forcibly removed from them and placed into adoption or institutions.

Australia has a long history of advertising children for foster or adoption in the media. From the late 1800’s, children could be sought and found in the classified columns of nearly half of Australia’s newspapers. As advertising in the classifieds became contentious, photographs of children available for adoption were published, seeking the interest of new adoptive parents. As late as 2017 the Tasmanian government advertised for foster carers on a Facebook “buy-and-sell” page.

Charities established to provide out of home care and government child welfare departments had stories published about children to find homes, or a placement for work or for holidays. Such stories were also published in order to raise money for charities.

Some organisations advertised the benefits of fostering and adopting children by developing stories around children in care and their foster parents.

Find and Connect has recently added this video from Tasmania advertising for homes for children. ‘Danny,’ whose mother can no longer afford to care for him, starts his journey through the welfare system at Malmesbury Receiving Home. Boys can later be seen working on the farm at Wybra Hall.

Claimants also described the daily chores required of residents of Wybra Hall. These included gathering grass to feed animals, including a cage of Tasmanian devils. Several former residents spoke of their fear at having to clean out the devil cage. One boy had to keep the animals at bay while another cleaned the cage. Others chores, performed before and/or after school, were weeding, milking, and general cleaning. The fact that, in 1963, the Home was self-sufficient in vegetables and milk suggests that the children worked hard.