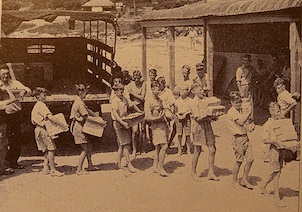 Holidays out of Home

For children in care, summer came with the opportunity of a holiday away from the institution where they lived.

These holidays could be with ‘holiday hosts’ – people who would take the children for weekends or longer; or at holiday homes, often close to the beach, that were owned by the institution.

These experiences were vastly different for the children involved, with some forming ongoing relationships with ‘holiday host’ families that would then support them as they left the institution, and others being used as free labour and abused.

These are some of the experiences children in care had over their summer holidays.

Advocate, 1951. Caption reads: At St Augustine’s Orphanage, Highton, there are 300 boys of whom those in this happy group are typical. The Christian Brothers are appealing to friends of the orphanage to give these lads a holiday in private-homes. Arrangements may be made by contacting the manager of the orphanage, Rev. Bro. W. T. McGee (phone Geelong U 6226)

“The first thing we did was to have a bath. We loved that big old bath tub, never had one at the “Home” that we knew of, we used to sit and slide along the side … and down the slope of the end of it. As luck would have it, it was about time for our bath anyway ready for the evening, so bathing and clean cloths were in order… After dinner we often played a bit of billiards on the full size table, prior to being read a story before bed.” Wayne Lewis in his blog post “Illegally adopted” at the National Museum of Australia’s Inside – Life in Children’s Homes & Institutions

“I don’t recall the number of foster homes I was sent to, but many of these people had no intention of having a child for the holidays to give them some home comforts, and a taste of family life, some wanted housemaids, someone to do the housework and watch the younger children and it was often a relief to get back to the orphanage.” Rosalie Bridgland, submission 351 to the Senate Inquiry into Children in Institutional Care

“After Christmas we went to the Orphanage’s Queenscliff Rest Home in Stevens Street for two precious weeks. Parole in paradise. Singing every mile, we travelled by slow train to Geelong, and the rest of the way by bus… We could choose which end of the bunk to have our pillow. We could be head-to-head with a friend, or touch toes—a trifling choice, but it meant a lot to us. It seemed the sort of decision normal children would be allowed to make.

Every day, the Orpho children walked to the back beach, with miles of clean, hot sand to sunbake on and heavy waves for body surfing. Waddling back from the beach with sand in the groin, we stopped at the old corner shop to buy ice blocks for a penny or, splashing out, a bottle of soft drink with a screw-top which was a shilling with a penny return on the bottle. If you couldn’t afford the screw-top bottle, you might settle for a fixed-top. If you drove a small nail into the top to make a hole, the contents could be savoured drop-by-drop giving satisfaction for hours. Queenscliff was, then, a place to relax. Day in day out we could lie in the sun for hours or roll in with the breakers”.  In Frank Golding’s memoir An orphan’s escape (2005)

Own Your Story, Own Your Mob, Mob Owns You – Re-authoring the colonial archive