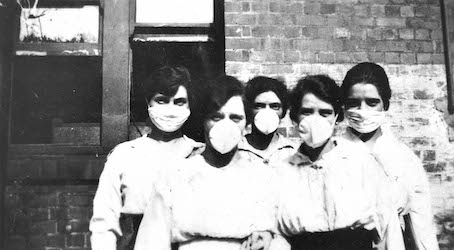 A century before COVID-19, Spanish flu tore through the world’s population threatening children in institutional care in Australia.

A year after COVID-19 first made it to our shores, we look back on a previous pandemic, and the devastating impact it had on children in institutional care.

In 1919, ‘Spanish flu’ was brought to Australia by soldiers returning from WWI, many dodging quarantine, and spread quickly through the population.

Australia’s Commonwealth Serum Laboratories developed an experimental vaccine that may have been of some benefit in controlling secondary infection, but was useless against the virus. Without an effective vaccine, and with children crowded into orphanages, it wasn’t long until the virus overtook institutions like St Vincent de Paul Orphanage in Melbourne.

In the first four days, sixty-five were infected, including one of the Christian Brothers working at the Orphanage, which was then converted into a hospital complete with a makeshift mortuary. On the fifth day, another 50 were diagnosed.

In parallels with the COVID-19 virus, nurses became exhausted from overwork, or became ill themselves, impacting on the childrens’ care. Forty percent of Australia’s population were infected with the virus now impacting heavily on the children at the Orphanage, which was without adequate funds or staff to care for them. Of Australia’s population of five million, up to 15 000 would die in what is known as one of history’s most deadly events.

As the plight of the children became known, donations of food, clothing and cash flooded in from all over Australia. The Red Cross provided assistance with the hospital, providing stretchers and bedding, and an additional 17 Sisters and 13 Brothers were sent to help nurse the sick. Another Brother was diagnosed. The children continued to fall ill.

By March 1919, after a month of battling the virus, the Orphanage was declared influenza-free. All but one of the children had become ill. All the children survived. The mortuary was packed away, having never been used.

The Spanish flu left many children orphaned, many of whom were then sent to institutions that had been ravaged by the influenza due to crowding, nutrition, and standards of care.

It wasn’t until the 1960’s that Australia finally began the move away from institutional care to fostering and smaller group houses, much later than other countries in the Commonwealth.

Looking back: The ‘Spanish Flu’ pandemic…

The virus that threatened to destroy a Melbourne orphanage

A century after the Spanish flu, are we ready for another pandemic?

My mother, the Spanish flu orphan