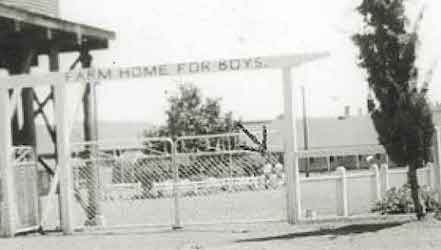 On 14 May 1961, sixty years ago, boys who had been sent to Westbrook Farm Home staged a mass breakout from what was, at the time, one of the most feared reformatories in Queensland.

The boys had been discussing a breakout for some time, some had tried previously to escape and many had run away individually, but the decision for the mass breakout was made quickly, with plans coming together on the same day the boys got away.

At 5.20pm, just after the Sunday evening meal, the boys filed from the mess room and were assembling into two groups.

“As previously arranged, an inmate named Boy 104 threw his hat in the air and commenced to run. He was immediately followed by Boy 94, there was a yell of “mass break” and as one inmate put it , there were hats flying in the air and boys running everywhere”. Schwarten Report 1961

A haystack was set alight to distract the warders while the breakout occurred. The person responsible (“Boy 88”), who was 16 years old, was sentenced to two years imprisonment at Boggo Road Jail for setting the fire.

Most of the boys returned to the isolated institution, or were easily rounded up having been unable to make it over the Toowoomba Ranges alone and on foot. A few may have stolen food or clothes to survive, or transport to help their escape. Despite being under 16 years old, they were sentenced to time in Boggo Road Jail with hardened adult criminals, a place that was preferable to them than the juvenile reformatory they had escaped.

The boys in Westbrook Farm Home experienced hunger, deprivation, and brutality. By 1961, conditions in the institution had attracted the attention of the media, and on May 14th a front page story in the Truth detailed “vicious brutality inflicted on the boys” and warned of “mutiny.”

The boys had long complained about conditions in the Home. Known as “inmates”, the boys worked in the piggery, dairy, growing food and other manual labour. Despite their dirty work they were provided only one clean set of clothes each week, and pyjamas. Laundry was done once a week by the young boys at the Home and was frequently returned dirty. They stayed in their dirty clothes all day every day, only changing for bed, except Sundays which was laundry day. They washed their own socks and wore them damp if they didn’t dry overnight. Clothing was often in poor condition and the boys were cold in winter. Their boots were never polished or cleaned and became hard, causing bleeding and blisters.

Food was monotonous, often cold, and contained weevils and grubs. Some was found to be not fit for human consumption. Hot water was stopped for all if there was talking in the bath house, and there was never enough for all the boys to shower, even in winter.

Punishments were harsh. Castor oil was forced into the boys by holding back their head and tipping the bottle down their throat. Castor oil punishment was largely given to children who ate vegetables from their own gardens to assuage their hunger. It caused cramping and diarrhoea.

‘Walking the path’ saw boys spending every spare moment outside of work, exercise and mealtime walking quickly back and forth across the grounds, and standing to attention in silence in the evening. They were not told how long the punishment would last, and in some cases it went on for months despite the pain and injury caused by walking so far in their hardened boots.

Corporal and other punishments were used as a way to coerce confessions from the boys. It was not unusual for a group of boys to be strapped repeatedly to try and find those who were responsible for actions such as stealing soap or bread. Boys were also strapped when they were suspected of breaking the rules, or for minor infractions of the rules. At the time, corporal punishment was allowed but “as seldom as possible and only when absolutely necessary for discipline”. Public strappings were also a frequent occurrence.

The boys were desperate to improve conditions in the Home. When questioned about reason for the mass breakout, all the boys mentioned the food, clothing, accommodation, the lack on incentive, and punishments that were harsh, cruel and unjustified.

Talk of a mass breakout had been increasing in the weeks leading up to Sunday 14th, and the boys became aware of the Truth article early that morning. One of their duties was to collect the papers for the staff, and news of the article spread quickly through the Home. Visitors on the day discussed the article with the boys, and at least one obtained clippings from his parents which were passed around the institution. They were galvanised to act.

The Home’s practice of appointing boys to maintain discipline made the official count of escapees difficult, with some returning to the isolated institution claiming to be ‘chasers,’ and not intending to breakout, and others failing to make it away from the isolated institution alone. Participants in the breakout put the number at 60 or 70, official figures were as low as 18.

The breakout led to the Schwarten review in September 1961 , which detailed many of the complaints the boys had about the Home.

Superintendent Golledge, who was known for beating the boys and initiating the worst of the punishments, such as Castor Oil and Walking The Path, was replaced as Superintendent.

Significant changes were made to the institution, which five years later became known as Westbrook Training Centre, itself attracting another inquiry in 1971.

The institution closed permanently in 1994.

Real Care the Second Time Around