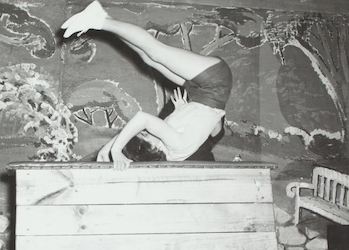 Simone Biles, the gymnast considered the “Greatest of All Time” (GOAT) has snatched headlines again, this time not for winning Olympic gold, but for stepping back from competition to protect her mental health.

Biles grew up in foster care until she was adopted by her grandparents, adding to a long line of people who experienced care as children and went on to become sporting legends, many of them Australian; including Karen Menzies, the first Aboriginal woman to play with the Matildas and member of the Stolen Generations, and Erik Horrie Paralympian, world champion rower, and basketballer, and former State Ward.

Sports were a part of many children’s lives in care. Boxing was the first to be taught to children, starting around the 1920s, but falling out of favour around the 1960s and 70s. Originally considered to teach boys “self control and equip boys with the means for disciplines self-defence,” (Holding on to Hope). Those who were in care at the time later reported that they learnt to respond with violence to problems as a result of the focus on boxing, wrestling and corporal punishment.

The Victorian Amateur Boxing and Wrestling championships began in 1931, and boys from St Vincent’s and and St Augustine’s regularly competed until the late 1930s when they held their own annual inter-orphanage tournament, taking advantage both of the appetite for betting on the sport at the time, and the ability to fundraise around competitions. The boys also fought as openers for the adult competitions.

“They would put the orpho boys in the ring, blindfold us and we would box away and as each boy was knocked over the referee would stop the fight and that boy was put out.

In the end the referee would take the blindfolds off the two remaining boys and they would fight for a three minute round. The [crowd] loved our all-ins and at the end of them, they would shower the ring with coins.”

Holding on to Hope: a history of the founding agencies of MacKillop Family services 1854-1997, Jill Barnard & Karen Twigg

Boys also participated in football and cricket, playing against other orphanages, or in local school competitions.

Girls at this time “experienced the health-promoting aspects of calisthenics and games suitable for females.” Softball was the game of choice for girls up until it became more socially acceptable for them to play a variety of sports, which wasn’t until the mid 1900s. By the 1970s, needlepoint had given way to hockey, soccer, and other sports we play today.

Girls playing basketball at the Home of the Good Shepherd, Ashfield, 1963

If you grew up in ‘care’ and played any sports (or managed to get out of it!), or had any favourite activities, we’d love to hear from you. You can leave us a comment below or email us any experiences you’d like to share – just select ‘feedback’ on the email form.