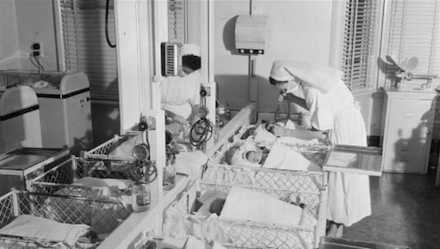 At Find & Connect, we’re committed to representing, and where possible centring, the voices of people who experienced the welfare system. These voices are largely absent from official records of past welfare practices, and are critical to our understanding of the impact these policies and practices had on those who experienced them first hand.

Women who had their babies taken illegally to be adopted by married couples were often powerless about the decisions made about them, and silenced by a system that viewed pregnancy out of marriage as a source of deep shame for women.

In 2013 the federal government apologised to those women following the Senate Inquiry into the Commonwealth Contribution to Former Forced Adoption Policies and Practices. All Australian states and territories except the Northern Territory have apologised for the practice of Forced Adoption.

We have been updating the information on findandconnect.gov.au to identify the hospitals and homes named in this report as institutions that illegally removed babies from their mothers, or otherwise supported the practice.

In September this year, the report of the Inquiry into Responses to Historical Adoptions in Victoria was tabled in Parliament.

Following this, women who experienced Forced Adoption shared their experience on ABC 774. We invite you to listen to their stories, in their own words and in their own voices, to gain a better understanding of the impacts this practice had on their lives.

Then and Now – Children in the Welfare System