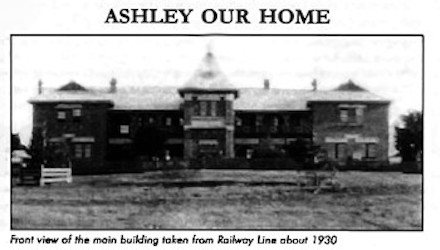 We often ask people who spent time in care to provide feedback on the information we provide about institutions in Australia, and the history of child welfare generally.

In the same way that records kept about children in care were reflective of the interests of the institution and with little consideration of the person whose life was being recorded, historical documents can reflect a specific view of history which does not fully consider the impact of a life in care.

The first of a series of articles in The Mercury, 1944, that presented the Home in a positive light

Original records were often poorly kept. Documents recording the history of a place can be scant, reflective only of the experience of those managing the institutions, and influenced by the values of the time. While we attempt to find as much information on the institutions we document as possible, in some instances we are forced to rely on the official record. Where institutions have changed name, purpose or location these dates may not have been recorded accurately. This historical information can be corrected by those with direct experience of the institution, or the broader welfare system in Australia at the time.

These historical documents also lack the voice of those who experienced care. Often, the only record of childrens’ experiences of care are found in the records of inquiries into significant incidents, such as riots. Official documents released by the institutions were often focused around fund raising, are reports to a committee where positive initiatives and successes were related, or otherwise painted life in care in a rosy light.

When we hear from people who experienced care, or who otherwise have knowledge of institutions, we are able to investigate further, finding new avenues of research or newly released records, and can incorporate the voices of those best placed to provide the context and experience of what life in care was like.

Ashley Home for Boys is an institution where we were able to provide important, new information after hearing from a previous resident. We were contacted by the resident with concerns about the type and veracity of information that had been recorded, including that official documents exaggerated the benefits of life in the Home, and that activities and initiatives the institution claimed to carry out for the children had never happened.

Following this initial contact, we were able to find two newly available research reports into the Home, which provided new and additional information to what had been available previously. Prior to these new reports, we had to rely heavily on Superintendent’s reports and newspaper articles from the time.

Using the new research, we were able to unearth additional newspaper articles which clarified some of the information we had already provided, and better documented some of the changes undertaken at the Home.

Whilst the original information provided a stark insight into the difficulties of life in the Home, those with the experience of living there found it overly positive. We have since incorporated new information to give a more honest and authentic account of life in the home, reflective of the experiences of the children who lived there rather than an account provided on their behalf.

As we continue our work updating the website for both content and design, launching as a more accessible findandconnect.gov.au later this year, we will continue to seek new information about the institutions on the site, particularly from the point of view of the children who experienced them. If you have any information or experiences to share about life in care, please contact us. We have recently redesigned our contact form to make it easier to do just that. Go to our contact form choose ‘Feedback’ and we’ll get back to you about updating the information on the site.

More Than Our Childhoods Project