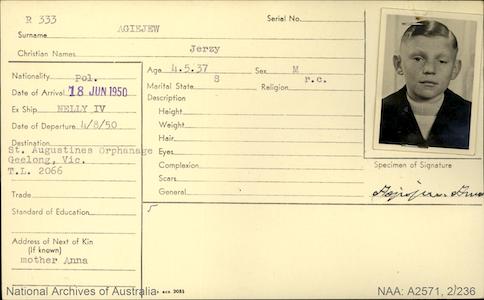 More than 300 000 migrants passed through Bonegilla Migrant Camp after WW2. It’s estimated that one in twenty Australians are linked to the camp.

Despite how many of us have a connection to the site, we still know little of the children that passed through on their way to life in Australia. Find & Connect is currently researching the children who moved from Bonegilla into the welfare system, and we’re hoping you can help.

Anna Adamowicz from Bonegilla spent time in an orphanage

Children at Bonegilla travelled with their families from Europe as part of a resettlement scheme for displaced persons and war refugees. They were granted passage under a two-year labour contract, where they lived at Bonegilla while their parents worked to pay for their passage and become accustomed to Australian life. Most did not speak English on arrival.

We know that some children at Bonegilla were placed in orphanages and other children’s homes, in some instances while their parents established a home and worked in new communities. Some, particularly single mothers, faced a number of barriers to maintaining their family, including difficulties in providing for their children, demands of the workplace being incompatible with child care responsibilities, or the wishes of new husbands. Some children lost their parent in the camp, and were moved on to what was considered more appropriate accommodation in the child welfare system.

Migrants from Bonegilla could be sent anywhere in Australia for work, and likewise their children were found in orphanages all over the country.

Jerzy Agiejew, who arrived with his mother to Bonegilla and spent time in an orphanage

There is very little information about the children of Bonegilla on the public record – we know about those who succeeded, and those who became public names. For the others though, history is largely silent.

If you have any information about children who entered the welfare system from Bonegilla or similar camps, even if only for a short time, we’d love to hear from you. Please share any knowledge or experience you have here: Email Us.

If we can use your information, we won’t use your name without your permission.

More Than Our Childhoods Project