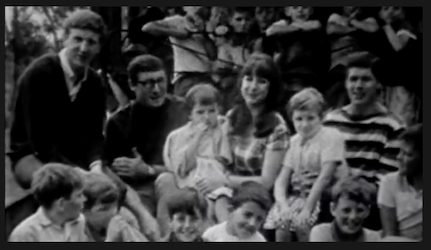 Reblog- All the little travellers: the children of ‘Mornington Ride’

Following the news of Judith Durham’s death we’re revisiting a very popular blog post from 2016 authored by Sarah Green & Mike Jones, who were previously employed by the Find & Connect web resource. While the story is built around The Seekers, at its heart it is about records – what they are, their importance to people who were in care as children, and the sometimes tenuous threads that can connect people back to their own childhood.

It’s a sad fact that many people who were in care do not know what they looked like as children. When I was the Find & Connect Client Liaison Officer (2011 to 2014), I received many emails from people desperately searching for photographs and video footage of themselves and their relatives. These images are so highly prized and there are so many researchers looking out for them – Care Leavers, historians, archivists, genealogists, to name only a few –  it seems impossible that there would be any on the public record that haven’t already been discovered. Stories such as the woman who found photographs while cleaning out her Aunt’s house seem to suggest that new discoveries are more likely to come from private collections.

So you can imagine my surprise when I accidentally stumbled across a video of children in care, in the most public of places: YouTube!

One weekend in January 2016 I was browsing YouTube videos – well, I was watching The Seekers – and I came across a video clip of Judith Durham and her bandmates performing Morningtown Ride on Puffing Billy. The train is filled with young boys, plus two girls sitting on the performers’ laps. The children look bored and uncomfortable, which made me wonder where on earth they came from. At the bottom of the video was a caption:

Filmed on ‘Puffing Billy’ near Melbourne with the kids from a local Children’s Home. I recently had an email from one of them, now in his 50s, after he recognised himself on the video!

This set in train (pardon the pun) a detective hunt to find out which Home the children were from. I chatted with Cate from the Find & Connect web resource and we brainstormed a few ideas. Blackburn Cottages? Sutherland Homes? Orana? None of them quite fit the age range and the date of 1966.

In many ways it reminded me of when we would get emails to the Find & Connect web resource with a rough description of a Home which we’d try to identify through a process of elimination. I sent a tweet to Care Leavers Australasia Network (CLAN) and Frank Golding, sure they would be able to help sleuth out the answer. They joined the hunt and soon there was a whole bunch of us trying to track it down. I wrote to the poster of the video, as well as to Open Place, the Victorian service for Forgotten Australians, but still no answers. Burwood Boys’ Home kept coming up as it had been mentioned on a few different forums, but it didn’t quite fit the bill.

I reckon most researchers love a good detective hunt and it’s this type of mission that reminds us why we do this work. I was beside myself with excitement at the idea of someone out there being reunited with video footage of themselves as a child, even if it was of them looking a bit bored.

Sarah told me the story of the Seekers clip over a drink in January. Like others who heard the story, I was immediately curious; and, as the former Lead Archivist on the Find & Connect web resource project (2013 to 2014), like Sarah I knew the immense value of these sorts of records. But, despite time spent searching the web and trying to follow the trail, I didn’t make any more progress than those already on the case.

As a regular Twitter user (@mikejonesmelb) I had found my Twitter contacts useful in the past, so put the word out.

Within 15 minutes I had a few responses, including a suggestion I check Find & Connect. While we were heartened to hear that people consider us a ‘first stop’ for information, in this case we needed to look further afield! The breakthrough came from Caz (@Birdwiththegold), who suggested we contact Seekers expert Graham Simpson.

I sent an email to Graham asking if he knew the name of the Home, and explaining why we were looking, and within just a few hours I had the following:

Thanks for your email.  The work you and your colleagues do sounds fascinating and very valuable.

Luckily, my memory is still good, so I believe I can help you with this query.

The photo you’re referring to is a production still from the Channel 7 TV special ‘The Seekers At Home’, which The Seekers filmed during their second Australian tour in 1966.

“Morningtown Ride” was filmed on Puffing Billy and the children were from the St. Vincent de Paul Orphanage, which I believe was in South Melbourne.

I thanked all my Twitter followers, and spread the word to those who had been interested in the video and the identity of the Home. Around the same time another Twitter friend, Lyndsay Farlow (@LyndsayFarlow), sent through a link to a 2014 article which backed up Graham’s recollection. Not only did we have our answer, we had confirmation in a published source.

The story of the Seekers video is a great example of a really important historical document ‘hidden’ in plain sight, and shows that the records which are significant to people who grew up in ‘care’ could come in a whole variety of forms. That these children from St. Vincent de Paul Orphanage were brought in as ‘background’ for a music video perhaps says something about attitudes at the time in which it was filmed. And the input from colleagues, Twitter friends, and external experts – all collaborating virtually – shows how technology can be used as part of research.

We will also use technology to publish our findings, in this blog post and as part of the Find & Connect web resource, to ensure the details of the video become public knowledge. Sarah and I would like to thank all the people who helped search for more information on the Morningtown Ride video.

Finally, if there is anyone who remembers being in the video, we would love to hear from you.

More Than a Story: Care Leavers’ Histories of Childhood