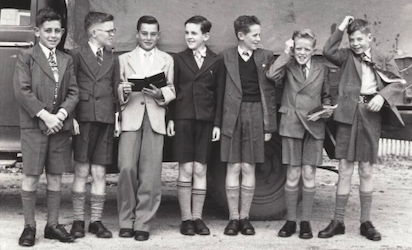 This post is from a conference paper presented to the Australian Society of Archivists Annual Conference in October 2022, Responding to Lost Records – Rebuilding from Other Sources by Catriona Milne, Manager Uniting Heritage Service. Quotes throughout, unless otherwise attributed, are from this paper.

Following a RAD Grant in 2018, Uniting has developed innovative ways to fill gaps in records that were lost or impacted by natural disasters, or destroyed for convenience.

This approach uses memories associated with people who were involved in care, as residents, staff or in other ways, to build a greater sense of life in care, to locate people who may hold knowledge of institutions, and even to put names to faces in photographs of children who lived in these institutions.

We learnt from the people who contacted us seeking records. Their memories and ideas gave us direction, as did some of the former staff and other records that we did have, such as Annual Reports and some photos.

Tally Ho is the first institution where Uniting put this new approach into practice. Many of the records associated with the home were thought to have been lost to natural disasters. It was also a large institution, leaving many former residents seeking information about their time there.

It was important to document what records had been created and lost and to understand what had happened. This involved following up former staff. A former social worker at Tally Ho described the then superintendent deciding to destroy the records to avoid having to store them when they moved buildings. She knew this was wrong and felt powerless, however she secreted some boxes of index cards which contain basic information about residents, dates, family, movements and some personal details such as height and hair colour.

Tally Ho residents described feeling “invisible, devalued and angry” at their inability to access any records associated with their time at the home. Uniting responded by finding any details of the home and its residents they could, working with past residents, available documents such as photos and in some cases residents’ hand-drawn maps- anywhere they could find out anything about the institution.

A reference group including  consumer representatives, worked with 2  paid  researchers to interview 10 people,  former staff and past residents of Tally Ho. These  people  described the  boys and their memories of daily life and staff. This could be the only record in some cases that a particular boy lived there.

Scouting Victoria provided a list of boys named in the Tally Ho Scout group, which also provided an important base to work from.  The only record of one former resident was the line entry that dated his entry into the Tally Ho scouts in 1952. Not only did this provide the man with information long since forgotten, but the Victorian education department who hold records of the school were able to streamline the process for accessing any of his school records.

Meetings are organised for those hoping to find others who were residents at the same time. One gathering was populated from a list of boys from Kilmany Park attending the local Primary School and some committee minutes, found after a search of historical societies.

The RAD grant “enabled administrative records such as Kilmany Park Committee Minutes, cash and wages book to be searched and all names of boys extracted onto a database. From these snippets people can flesh out their own story. Superintendent’s reports would name the boys entering and leaving Kilmany Park, something of their situation and their achievements in sport or some other capacity.”

There have been 2 remarkable spinoffs from this project. When we are approached for records  if we find photos, we also know who has donated the photo. If the person wishes it, we can arrange for a meeting between the child and former nurse. For people who rarely remember this time in their lives this can be a profound experience.

When I heard that a meeting was set up for me to meet … one of the nurses at the babies home, I was very excited and nervous at the same time. as soon as I walked in the room, I felt some sort of connection with her, and felt like I’ve known her all my life, even though it’s been 50 years, but I still can’t remember anything from the babies home. We were there for a couple of hours looking at photos and Gwen was explaining what it was like at the home….eg she explained how they used to clean our teeth with salt as they didn’t have toothpaste.

Selected former mothercraft trainees spoke with them about their memories of the Homes, daily life and their care of the babies and children…
There were many tears and we were all surprised by the strength of the connections and openness of all participants. One man realised that one of the women there would have looked after him as a baby.

We encourage all record holders to look for appropriate opportunities to add to records, particularly where they are sparse or missing. For those looking to build memories of their childhoods, any information can be very powerful.

If you were in care between 1920 and 1990 and this blog post brought up issues for you, contact the support service based in your home state or territory: https://www.findandconnect.gov.au/contact/support-service