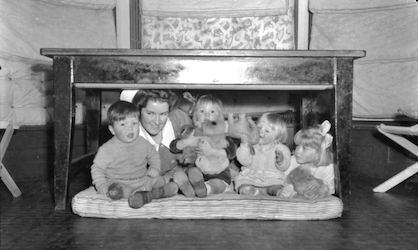 In 1918, at 11am on the 11th of November, World War 1 ended. A two minute silence to recognise the losses of war has been observed each year since, at the time the armistice came into effect.

Many children from institutions across Australia fought in the world wars, the names of those who didn’t make it home recorded on honour rolls in some of the homes.

Those too young to go to war were also impacted heavily, by the privations of economic depression followed by rationing, evening blackouts, & the fear of invasion. They were also enlisted to help the war effort from homes, and participated in a number of ways.

At St Vincent de Paul’s Boy’s and St Augustine’s Orphanages, newspaper articles about the war were read aloud during meals, and the St Vincent’s Band was asked to play at various events and the Town Hall on Friday night by recruiting authorities.

Older boys at St Vincent’s made thousands of sandbag hand grenades and targets to go to military training camps.

After Japan entered the war, preparations were made to secure orphanages. One boy who entered St Vincent’s in 1942 recalled an environment of…

Children in institutions all over Australia were evacuated, including 96 children and three house mothers taking 44 days to travel from Croker Island NT to Sydney NSW by foot, boat, canoe, truck and train

The military used, or planned to use several locations to house and train soldiers, including Americans who were based in Australia. Overcrowding became a significant issue as a “heavy increase” in children admitted to homes, staff shortages, and a lack of foster homes combined to see children squeezed in dormitories, verandahs and balconies.

Whilst the shift toward more women entering the workforce was blamed for the increase in children relying on state care, there is little evidence to support this. Very low financial support for foster families impacted on the numbers able to ‘board out’ children, and numbers began a steep descent during the 1930s. Mothers left alone to support large families on a military allowance, or who were unable to care for their children independently due to poor health or the housing shortage had few options for their children’s ongoing care.  Children of widowed soldiers were also placed in care while their fathers were at war.

With petrol rationing, restricted public transport and little activity on the streets during brown outs, children missed visits from their families, outings and trips away from the institutions, and freedoms they previously enjoyed were cut heavily.

Children greeted the end of war along with the same excitement that was felt all over Australia, by running, singing, and dancing with relief.

Quotes and background information in this post were taken from “Holding on to Hope, A History of the Founding Agencies of MacKillop Family Services 1854 – 1997” by Jill Barnard and Karen Twigg, and findandconnect.gov.au